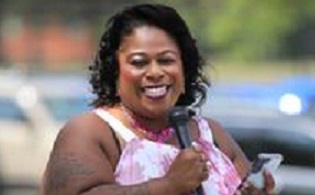 Tamir Rice would have been 20 years old this year if he had not been killed by police in 2014 at Cudell Recreation Center on Cleveland’s West Side.

His family is marking his 20th birthday with a memorial outside the rec center in the park where Rice was killed by Cleveland police when he was 12 years old. He had been playing with an airsoft gun in 2014.

“The family is in a grieving process still, after eight years,” she said. “It’s very hard to be here, but I’m happy, too, because this is the last memory of my son.”

The memorial is designed to look like a butterfly, with flowers meant to attract butterflies. Artist Molly Nagin says butterflies represent change, much like the change Tamir’s death brought to the country.

The garden marks the site where Tamir sat under a gazebo when police drove onto the grass a few feet away from him and shot him within seconds. Rice died at the hospital the next day. The picnic table and gazebo have been removed.

The ribbon cutting ceremony concluded with a release of butterflies. One landed on a plaque inscribed “In loving memory of my baby boy” with a picture of Tamir.]

“You are one of the eternal vessels of inspiration that sparked U.S. policy change and police reform,” the inscription reads. “The government of the United States shall never know the amount or depth of everlasting pain they have caused Black Americans.”

Tamir’s sister Tajai was at the park the day he was shot and saw her brother lying on the ground while officers prevented her from going to him. She cried during the ceremony as her siblings spoke about their loss.

“My mom did this in memory of my brother to show him we still love him, that we never forgot about him,” Tamir’s brother Tayvon said.

Tasheonna Rice, Tamir’s sister, said the memorial is a symbol of tranquility to her.

“It’s just real nice, a nice place that doesn’t have to be remembered as the tragic place that it was,” she said.

She began to tear up, thinking of brother and the 20-year-old man he might have been if he had not been killed.