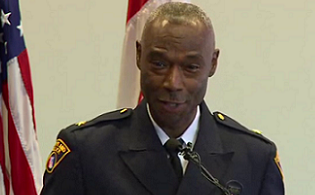 Wayne Drummond, who has been serving as Interim Chief of Police since Cleveland Mayor Justin Bibb took office earlier this year, has officially been appointed to the role as Chief of Police.

“When I started my career over 33 years ago now in the first district as a patrol officer on the far west side, I ever envisioned that I would become a chief of police,” Chief Drummond said after his appointment was announced. “That was never in my thoughts.”

“During the campaign I talked about the importance of conducing a national search to bring new leadership to the police department,” Mayor Bibb said. “However, once I took office I had a better understanding of the challenges – but also of the opportunities – facing our department inside the city of Cleveland, I learned quickly about the importance of leveraging local leadership and trusted leaders inside of our department to truly create a department that shares my values of justice, equity and constitutionally appropriate policing in the city of Cleveland.”

After first selecting Drummond to serve as the Interim Chief, he said the two began discussions about next steps for the department.

“We had very candid conversations about his vision for police reform,” Mayor Bibb said. “His vision to make sure we can recruit and retain more officers inside of our department and his vision to use new ideas and new solutions to build a national model of policing right here in Cleveland, Ohio. Our journey together to create that vision started before we took our oaths of office. It started on New Year’s Eve after we lost our officer Shane Bartek. I remember Wayne’s steadiness, his calm demeanor and his persistence to get that moment right. That’s when I knew we had a bright, shining star right here in Cleveland, Ohio.”

With his appointment, Drummond becomes the 41st Chief of Police in the city of Cleveland.

“Sometimes you don’t need to do a search to find your leader,” Mayor Bibb added. “Sometimes that leader finds you.”