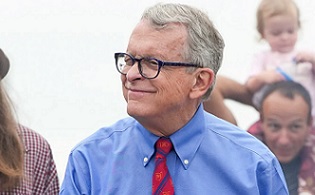 Gov. Mike DeWine says his fellow Republican state lawmakers have work to do when they return this fall on making Ohio law clear on abortion, now that the US Supreme Court has ruled states have the power to regulate it. While DeWine is not saying what he wants to see passed, he is talking about bills that are non-starters.

Just before he toured the Ohio State Fair on opening day, DeWine said the discussion around abortion has gotten, in his words, “off the rails a little bit” – such as the suggestion from at least one Republican state lawmaker to consider banning contraception.

“That’s just absurd. No one is, in their right mind is going to go try to have the state be involved in a contraception decision. We’ve gotten even into marriage now, you know, this is not going to change what we have today in regard to that area,” DeWine said.

Rep. Jean Schmidt (R-Cincinnati), who sponsored the “trigger” ban that would have outlawed abortion immediately upon a Supreme Court decision striking down legalized abortion, has suggested in interviews that she would consider a ban on contraceptives.

Some Democratic lawmakers have said they will push for a constitutional amendment to guarantee access to abortion and birth control, but there’s been no movement on that while lawmakers are in summer recess.

Ohio law bans same-sex marriage, but the US Supreme Court legalized it in 2015 in a case from Ohio brought by Jim Obergefell, who is now a Democratic candidate for the Ohio House. He sued Ohio Department of Health Director Rick Hodges for the right to be listed as the surviving spouse on his husband’s death certificate.

Justice Clarence Thomas has suggested revisiting that Ohio case, as well as the 1965 case allowing use of contraceptives.