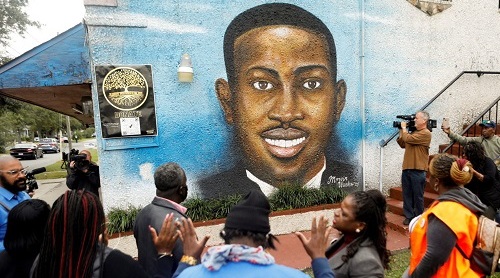 Despite their pleas to do their time in the feds, they’ll do harder time where they committed their crimes

Prison, generally speaking, ain’t a place you want to be. Two of my uncles have done decades behind the wall in our home state of Pennsylvania; another retired a few years back from a career as a correctional officer in multiple penitentiaries here. I’ve written about my friend and high school classmate who did two dimes on a wrongful conviction for murder. All of them gave me the same advice over the years, which I’ve followed without question: keep your ass out of jail by all means necessary.

But there’s jail, and then there’s jail in Georgia. The state’s prison system has an awful history that includes convict leasing—which wasn’t much more than a second incarnation of slavery— and chain gangs. Georgia’s state lockups today are among the most violent, least safe places in the country in which to pay your debt to society. Records show at least 57 people were murdered in Georgia prisons in 2020 and 2021, with the causes of death ranging from strangulation to stabbing to blunt force trauma. The Justice Department is investigating Georgia’s Department of Corrections over allegations it either can’t, or won’t, stop abuse against LGBTQ prisoners.

One guard told state lawmakers at a hearing last September that “gangs pretty much run the prison,” according to the Atlanta Journal Constitution.

So if I knew I had a long stretch, say, the rest of my natural life, ahead of me in prison, and I had a chance to do my time in the relatively safe confines of the federal system rather than a Georgia jail. I’d especially want that if I were a white guy getting up in age who was convicted of chasing down a Black man and killing him for no reason, and I knew that whatever lockup I was sent to would be full of guys who looked a lot more like my victim than like me.

And if I were a judge hearing that plea—a plea from three convicted murderers they they get to serve their time in a safer jail on a civil rights conviction rather than in a state jail on a murder beef, Id’ do what U.S. District Judge Lisa Godbey Wood did today: tell all of them to pull up the same big boy drawls they wore when they killed Ahmaud Arbery last year, and let them figure it out with the homies in Georgia.

Godbey denied pleas from Gregory McMichael, Travis McMichael and William “Roddy” Bryan to let them go to federal prison out of fears for their safety and their health rather than do their time in the Georgia jails where 57 people left in body bags before they could finish their time. I can think of a few different ways Godbey might have wanted to answer:

“Absolutely not.”
“Are you fucking serious?”
“GTFOH.”

Being a federal judge and all, Godbey was more diplomatic, telling them that she “neither the authority nor the inclination” to override the rules, according to CNN. But this was never about legal parameters or judicial discretion. It was about the audacity that three murderers, racists who never gave Arbery a chance to plead his own case before they took his life because he was Black and running through their neighborhood.

Of the 57 people who were killed in Georgia’s prisons in the last two years, it’s safe to assume not all of them were convicted murderers who also had a hate crime tacked on to their rap sheets. Some might have have been there for robberies or non-violent drug crimes, in other words, not necessarily choir boys but also not folks who terminated anyone else’s life. None of them got leniency from the judge that gave them, in the words of Travis McMichael’s attorney, Amy Lee Copeland, a “backdoor death penalty” by sending them into Georgia’s atrocious prison system.

The McMichaels didn’t deserve that leniency either and fortunately, they’re headed to jail for life—however long that is—in Georgia.