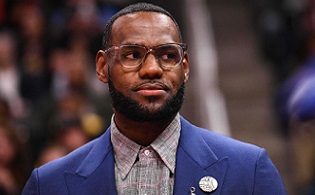 The Cleveland Cavaliers might have the cap space to sign LeBron James in 2023, but that’s not currently in the team’s plans, according to Joe Vardon of The Athletic.

“The Cavs are not proceeding with the intention of getting LeBron for a third time,” Vardon wrote.

James, a native of nearby Akron, Ohio, was drafted by the Cavaliers and spent his first seven years with the team. After leaving for the Miami Heat, he returned to Cleveland four years later and helped bring home an NBA title in 2016.

The 37-year-old is heading into his fifth season with the Los Angeles Lakers in 2022-23, but he can become a free agent next summer and previously indicated a return to Cleveland is possible.

“The door’s not closed on that,” James told Jason Lloyd of The Athletic in February. “I’m not saying I’m coming back and playing, I don’t know. I don’t know what my future holds. I don’t even know when I’m free.”

When LeBron returned to Cleveland in 2014, the squad hadn’t made the playoffs in four years but had exciting young players, most notably Kyrie Irving. The team has once again gone four years without a postseason appearance going into 2022-23, but Darius Garland, Jarrett Allen and Evan Mobley represent an elite young core.

Adding James in 2023-24 could once again turn the team into a legitimate contender.

As Vardon noted, the Cavaliers also own their 2024 first-round pick, which could be used on James’ oldest son, Bronny James. LeBron has said he wants to play alongside his son, but the Lakers don’t have a first-round pick when Bronny is eligible in 2024.

Despite these connections, the Cavs seemingly aren’t planning for LeBron’s return and will instead build around the players already on the roster.

Vardon reported the superstar is eligible to sign a two-year extension with the Lakers on Thursday worth about $98 million.