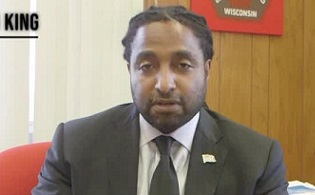 Advocates of an effort to remove East Cleveland Mayor Brandon King from office have gathered enough petition signatures to put the mayor’s political fate on the November ballot.

The Cuyahoga County Board of Elections last Thursday certified that the campaign had gathered 322 valid signatures, just more than the 311 needed to force the issue. Under East Cleveland’s charter, King has until Aug. 18 to resign or face a recall vote — likely in the Nov. 8 general election.

William Fambrough, an organizer of the recall campaign who is also suing the city and the mayor, accused King of allowing police to abuse their power and of circumventing the city council’s authority.

In a lawsuit filed in June, Fambrough alleged that East Cleveland police towed and damaged a van that he was using to promote the candidacy of one of King’s 2021 Democratic primary opponents.

“The mayor is using the police as a private — a kind of private police force that attacks his enemies, that’s what he’s doing,” Fambrough told Ideastream Public Media.

A message seeking comment was left with the mayor’s office in East Cleveland.

Fambrough, who runs a media company, had outfitted the van with sound equipment to broadcast messages supporting Juanita Gowdy, an East Cleveland City Council member who criticized King and ran against him.

In August 2021, weeks before the Sept. 14 primary, police towed Fambrough’s van and cited him for a noise violation, according to the lawsuit. In addition to the mayor, Fambrough named the police chief, law director and several officers as defendants.

In court filings, East Cleveland Law Director Willa Hemmons has denied the allegations and asked a judge to dismiss the case.

“The majority of the ‘facts’ set forth in Plaintiff’s Complaint reflect an elevated sense of importance at being a political operative that converts to an grandiose misperception of events,” Hemmons wrote. “Plaintiff’s Complaint is premised upon a lot of social media and mass media hype designed to inflame and incite the public.”

No ruling on the motion to dismiss has yet been made.

Fambrough also faulted the mayor for the frequent police chases in this eastern Cleveland suburb. In the first 120 days of 2021, 40% of East Cleveland chases ended in crashes, according to an analysis by Cleveland.com.

“The mayor sets the tone, really, for the police department,” Fambrough said. “The mayor tells his appointed chief of police what will be tolerated and what will not. And it’s just like the Wild West here with these police chases.”

King took office in Decmber 2016 after his predecessor, Gary Norton, was recalled along with the council president. Then the vice president of council, King was next in line of succession. He has since won reelection in 2017 and 2021.

The city has sold off property, laid off workers, increased garbage fees and opened its own impound lot to cut costs and bring in revenue, according to a report by the Ohio Office of Budget and Management.

Nevertheless, the city ended 2021 with a deficit in one fund and spending outpacing council appropriations in many line items in the general fund, according to the report. The city also could be on the hook for damages in several legal cases, the report said.

“It is not anticipated the City will be released from fiscal emergency in the near future,” the report read.