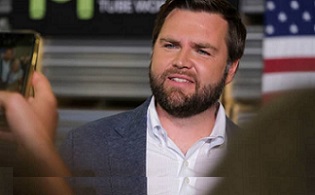 Some advocates for survivors of domestic violence are upset with Republican U.S. Senate candidate J.D. Vance for comments he reportedly made that suggest people in violent marriages shouldn’t get divorced.

Lydia Strauss, a Columbus woman who has worked with domestic violence survivors for more than two decades, said Vance’s rhetoric is downright dangerous.

“Vance thinks we should stay in violent marriages, he wants to make abortion illegal nationally, he called rape inconvenient and even compared abortion to slavery,” Strauss said.

The advocates are reacting to a story first reported by Vice News last week.

The news outlet reported that, while speaking to a California high school in September, Vance said: “This is one of the great tricks that I think the sexual revolution pulled on the American populace, which is the idea that like, ‘well, OK, these marriages were fundamentally, you know, they were maybe even violent, but certainly they were unhappy. And so getting rid of them and making it easier for people to shift spouses like they change their underwear, that’s going to make people happier in the long term.'”

“Telling women that they should stay in violent marriages is disgusting and dangerous. And if women were to listen to J.D. Vance’s callous advice, it would lead to children seeing more violence in their home,” Strauss said.

Strauss, along with some Democratic state lawmakers, said Vance has an “anti-woman” agenda.

Vance, the author of the best selling book, “Hillbilly Elegy,” said he is not against women. In his book, Vance wrote about the opioid struggles his single mother faced and credited his grandmother, who had marital problems of her own, for stepping in to raise him.

When asked earlier this week to explain comments that some have labeled anti-woman or anti-LGBTQ, Vance stressed the importance of encouraging family stability.

“If you look at childhood trauma, the effect it has on kids growing up, if you look at the effect that our skyrocketing family instability rate has on our crime and a child’s happiness, you’ve got to talk about this stuff,” Vance said.

When it comes to abortion, Vance said he’s “pro-life” and he said he thinks legalized abortion has been predicated on a lie.

“The whole lie that we were told in our country I think before I was born, the whole lie is that somehow abortion would be liberating. I saw a lot of young women get pressured, get bullied into abortions growing up in Middletown, Ohio. This thing that we did, it wasn’t good for young women. It wasn’t good for children. I don’t think it was good for fathers. Don’t we want young boys to become responsible men and responsible fathers?” Vance asked.

Vance has a new ad on the airwaves in Ohio this week that features his wife, Usha, and their children.

Vance’s Democratic opponent, Tim Ryan, was a guest speaker at a rally for abortion rights at the Ohio Statehouse in late June, after the U.S. Supreme Court overturned Roe v. Wade, the 1973 ruling that allowed abortion nationwide. Ryan, who once opposed abortion because of his Catholic faith, said he now supports abortion rights because he understands it is a decision that is best made by the woman involved.