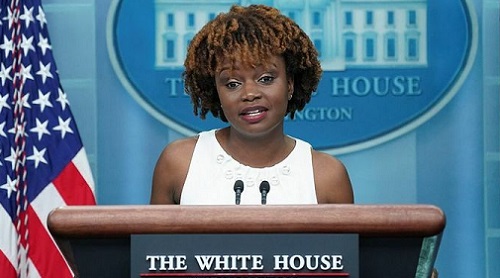 “Karine not only brings the experience, talent and integrity needed for this difficult job, but she will continue to lead the way in communicating about the work of the Biden-Harris Administration on behalf of the American people,” Biden said in a statement.

Jean-Pierre thanked the Biden administration for the “honor and privilege” of her next role and committed to representing the country the best she can.

“This is a historic moment, and it is not lost on me,” Jean-Pierre said in a press conference. “I understand how important it is for so many people out there, so many different communities. … I stand on their shoulders, and I have been throughout my career.”

Jean-Pierre was born on Martinique, a French island, and raised in New York City. She graduated from the New York Institute of Technology and received a master’s degree from Columbia University.

She is currently the principal deputy press secretary and the deputy assistant to the president. She has served in senior communication and political roles in the Biden administration, in the Biden campaign and to then-Vice President Biden for the Obama administration. Jean-Pierre joined the Columbia University faculty in 2014, where she is a lecturer in international and public affairs.

“As a career coach who helps underrepresented professionals advance their careers, I know what an uphill battle it often is just to be seen, heard, supported, recognized and respected,” Goredema said. “It’s always incredible to witness barriers being broken, and Karine Jean-Pierre’s tenure as White House press secretary begins at such a pivotal time.”

“Not only is she among the smartest, hardest-working, sincere and kind individuals in public service, she both symbolizes and embodies the multiple identities and life experiences that this White House speaks through and to as the official spokesperson representing our president,” Bond said.