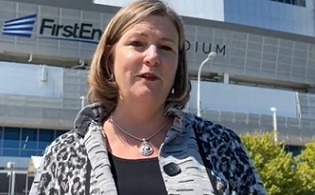 Nan Whaley, Democratic candidate for Ohio governor, stood in front of FirstEnergy Stadium, the home of the Cleveland Browns, to draw attention to the federal corruption case involving the utility company and call on Gov. Mike DeWine and Lt. Gov. Jon Husted, both Republicans, to release emails from their private accounts that are associated with the controversial nuclear bailout law.

Whaley’s action comes just days after text messages from FirstEnergy executives raised questions about the involvement of DeWine and Husted in the company’s legislative agenda.

“Today, I am calling on DeWine and Husted to release all, all of their private emails and texts about this scandal. That includes any communications with legislators which Jon Husted has even refused to discuss,” Whaley said.

“It is clear that these guys were working for FirstEnergy, not Ohioans,” Whaley said.

Whaley rolled out an ethics plan last year that she said would “provide a complete and total overhaul of our statehouse.”

DeWine and Husted both say they were not involved in any wrongdoing in connection with the corruption scandal. And they said they wanted to help pass HB6 because they believe Ohio’s two nuclear plants are important to the state’s environment and economy.

As far as the emails are concerned, DeWine’s spokesman, Dan Tierney, said Whaley knows it is “utter nonsense.”

“The idea that there are two accounts or the governor is hiding something is complete falsehood and nonsense,” Tierney said.

Tierney said DeWine is accountable to the press and public.

“He does use a private email account but those emails are provided pursuant to public records requests. It is treated as a public account. And any reporter who has ever requested the governor’s emails or calendar has received those emails from those accounts pursuant to the Public Records Act,” Tierney said.

Two others, Juan Cespedes and Jeff Longstreth, have pleaded guilty to racketeering and have admitted to playing a role in the bribery scheme. Another person who was charged, former lobbyist Neil Clark, died by suicide.

Prosecutors have called the scandal involving HB6 the largest corruption scheme in Ohio history. The Ohio Legislature has repealed the portion of HB6 related to nuclear subsidies, but other provisions that extend coal plant subsidies and rollback renewable energy standards remain in state law.

So far, the multi-tentacled and complicated scandal hasn’t seemed to politically hurt majority Republicans and some Democrats who voted for the legislation at the heart of it.