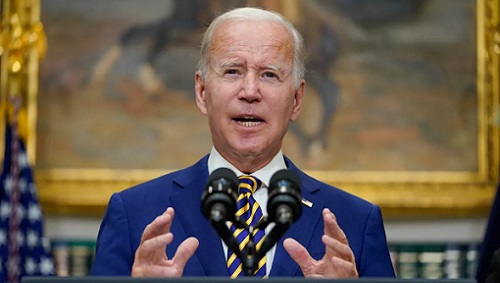 With billions of dollars of student debt cleared from the books, millions woke up today to a different financial world. One where they have a higher net worth, more purchasing power and better access to financial products, like mortgages.

President Joe Biden’s announcement on mass forgiveness of student loans will transform the lives of 43 million borrowers — completely paying off the debt of 20 million.

“This will offer people an opportunity to climb the economic ladder that wasn’t available to them yesterday,” says Mike Pierce, executive director of the Student Borrower Protection Center.

“Canceling the debt and freeing people of those burdens is going to open up all these avenues for them to live more full and complete economic lives,” he said.

But perhaps even more significant is the Biden administration’s proposal to restructure how loans are repaid, giving future borrowers a lot more leeway when it comes to paying back debt.

Forgiveness has been a long time coming

President Joe Biden announced last Wednesday that the Department of Education will forgive up to $20,000 in student loans for those who qualified for Pell Grants and $10,000 for all other borrowers earning less than $125,000. Pell Grants are given to students who are considered to have exceptional financial need.

Biden also extended the moratorium on payments one “final” time through Dec. 31, 2022 and has proposed significant changes that will make repayment more manageable.

The announcement has been a long time coming with the pandemic-era freeze on payments set to end Aug. 31. Biden, who pledged to cancel thousands of dollars in student debt for most borrowers during the election, had promised an answer before September.

Biden had already made smaller steps toward clearing debt. Last week, he announced canceling student debt for those who attended ITT Tech, wiping $3.9 billion from the records. This, however, goes much further.

“Canceling this, this will certainly wipe the slate clean for the 15 million people who owe less than $10,000 in student loan debt,” says Angelique Palomar, associate director of communications at The Institute for College Access and Success.

And even those who won’t see their student debt wiped out will see significantly reduced payments.

“It’s important to realize that this isn’t just transformational for the folks that are debt free,” says Pierce. “Lots of other folks are going to get real, meaningful, tangible, immediate financial relief, when the student loan system turns back on.”

Another part of last Wednesday’s announcement, which could potentially have an even bigger impact than the cancellation, is how the Biden administration hopes to make repaying your loans more manageable in the future.

It’s proposing a repayment plan that’s income driven, which it says will “substantially reduce” monthly payments for people with lower and middle incomes.

The proposed plan would require borrowers to pay no more than 5% of their “discretionary” income on undergraduate loans, as opposed to the current 10% standard.

It would also raise the amount that is considered non-discretionary income, so that if you earn under 225% of the federal poverty line, you won’t have a monthly payment until your income increases that threshold.

And if you owe less than $12,000, your balance would be forgiven after 10 years of paying instead of 20, among other proposals.

How exactly this will work, what it will cost and who will benefit hasn’t been made public yet.

“Obviously, we don’t have a lot of the details, and I think those details are going to be very important,” says Persis Yu, policy director and Managing Counsel at the Student Borrower Protection Center.

Student loans make up the second-biggest chunk of household debt in the U.S., next to mortgages. It totals $1.6 trillion for 45 million borrowers. About 92% of that is federal student loans.

And while the one-time cancellation and potentially smaller payments in the future is a relief, it can also make some people think it’s likely to happen again.

“It doesn’t fix it for the overall problem, which is dramatic increases in student loan borrowers,” says Phillip Braun, clinical professor of finance at North Western University’s Kellogg School of Management.

Braun adds that student debt owned by the government has gone up more than 600% since the Great Recession.

“So this can’t continue. The U.S. government’s got to figure out a way that they don’t have this larger burden of student loans affecting their budgets across time.”

Forgiving $10,000 per borrower making less than $125,000 would cost taxpayers $300 billion this year, according to the Penn Wharton Budget Model. However, the model hasn’t been updated since the announcement that many people would have up to $20,000 forgiven.

Braun says forgiveness may encourage people to take on more debt, or else give institutions a reason to raise the cost of schooling.

Concerns forgiveness will add to inflation

Many have argued that forgiving student loan debt now will only add to inflationary pressures.

A recent poll by CNBC showed that nearly 60% of Americans were worried that student loan forgiveness would add to inflation issues.

Even Larry Summers pushed the president not to forgive too much, saying it would add to inflation pressures. Earlier this week Summers, former Secretary of the Treasury for President Clinton, tweeted that if relief is to be given, it should only be for the “first few thousand dollars of debt.”

“The worst idea would be a continuation of the current moratorium that benefits among others highly paid surgeons, lawyers and investment bankers.”

Braun, however, doesn’t believe the forgiveness will add greatly to inflation.

“Borrowers are currently not paying their loan payments right now,” he said. “And so for those who get a reduction or elimination of their student loans, to some degree, it’s going to be status quo.”

And for those who don’t get total forgiveness will start payments again in January.

“So they’ll be taking money out of the economy, sort of countering the possibility that those who get relief are going to spend more money.”

Planning your next steps

So where do you go from here? Information on the plan is still trickling out, but Palomar at The Institute for College Access and Success has some tips.

You’ll want to keep an open line of communication with your loan servicer, she says.

“It’s a good idea for all borrowers, as soon as they can, to check out the status of their student loans,” Palomar says.

Confirm what payment plan you’re on and make sure your information is updated as needed. You can do this by going to studentaid.gov. There, you can make changes to your account, keep your information up to date and adjust your payment schedule and plan.