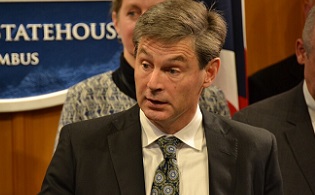 An Ohio Republican state senator is proposing a five-point plan to change gun laws that includes a court-ordered gun seizure mechanism, a co-signer requirement for gun buyers under 21, and money to increase the number of mental health workers and expansion of regional mental health centers.

Sen. Matt Dolan (R-Chagrin Falls) failed to push a gun law reform bill through the Legislature three years ago. His new proposal has similar elements and a few new ones.

But the bill does not require universal background checks and doesn’t ban gun sales to people under 21. An NPR/Ipsos survey in July found overwhelming support for those ideas, including among gun owners.

“We must change the conversation on public safety in Ohio,” Dolan said in a statement about the bill.

The bill comes three years after Dolan tried to push Gov. Mike DeWine’s “STRONG Ohio” gun reform measure through the Legislature after the mass shooting in Dayton. That measure received a few hearings but was never voted out of committee.

The bill would create what it calls a due process safety protection order. A judge could issue that order to police, to seize and temporarily hold the firearms of a person deemed by the judge to be a danger to themselves or others because of mental health issues.

The bill would require a co-signer for purchases of guns by people ages 18 to 21. That co-signer, who must be over 25 years old, could be held civilly liable if the gun is used in a felony while the buyer is under 21.

Dolan’s bill also includes a seller’s protection certificate, which was in the STRONG Ohio proposal. It also requires enhanced background check information be added into state and federal law enforcement databases by the end of the next business day.

And it includes more money to increase the number of mental health treatment workers and expansion of regional mental health centers. But it doesn’t specify how much.

In March, DeWine signed into law a measure allowing people to carry concealed weapons without first having to obtain a permit or take a training course.

And this year, schools are opening under a new law that allows teachers and other school staff to be armed in school buildings if they want to and the district approves. The new law also drops the required training from around 700 hours to 24 hours.