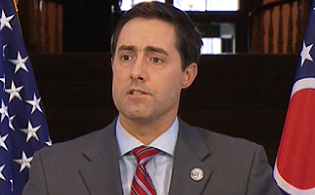 The specific language for describing the amendments was approved Monday by the Ohio Ballot Board, which is a panel of legislative appointees led by Secretary of State Frank LaRose, a Republican. The state Legislature had sent the amendments in June to be put on the ballot.

Issue 1, the amendment on bail, would change the conditions and amount of money needed to release someone. Bail would no longer be a standard set by the state. Instead, it would be up to a judge’s discretion based on factors such as public safety, including the seriousness of an offense, an individual’s criminal record, the likelihood a person will commit another offense, or “any other factor the General Assembly may prescribe.”

The proposal followed a ruling by a divided Ohio Supreme Court in January, which said a $1.5 million bond for a Cincinnati man accused of fatally shooting a man during a robbery was too high.

The language cleared the committee unanimously.

The second amendment, Issue 2, would prohibit local governments from allowing non-U.S. citizens to vote in local elections. They are already prohibited from voting in federal and state elections, but some communities around the country have begun allowing noncitizen residents to take part in elections on things like local taxes, school boards and who will run their municipal government.

Republicans oppose the trend, calling voting the ultimate privilege of citizenship. Democrats in Ohio have objected to the GOP-backed ban as allowing taxation without representation and infringing on home rule.

Democratic state Rep. Mike Skindell wanted the ballot summary for Issue 2 to state that the amendment restricts voting to “only 18-year-olds” — asserting that, when lawmakers added that “only” U.S. citizens can vote, the word got applied to other parts of the constitutional clause. LaRose balked, but changed the summary language to make clear it didn’t just apply to 18-year-olds.

The language cleared the committee 3-2.