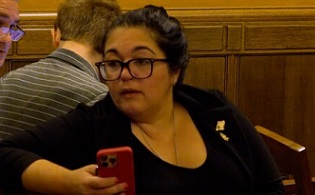 A conservative podcaster who embraces former President Donald Trump’s discredited claims of a stolen 2020 election should be tossed from Ohio’s fall ballot, where she is seeking to become the state elections chief, an Ohio justice recommended Friday.

Terpsehore “Tore” Maras vowed to appeal, if the recommendation is upheld.

“This is just another way to stymy the voices that don’t fit into the neat boxes,” Maras told The Associated Press outside of her hearing Thursday.

Retired Ohio Supreme Court Justice Terrence O’Donnell made his determination against Maras on Friday, a day after an hourslong protest hearing on challenges to dozens of the signatures that had qualified her for the ballot last month, as well her decision to become an independent after failing to make the ballot as a Republican.

O’Donnell determined that 18 of 35 challenged signatures were invalid, enough to take Maras below the 5,000 required.

O’Donnell’s recommendation goes back to Republican Secretary of State Frank LaRose’s office for a final ruling. O’Donnell had been selected to hear the case because LaRose is Maras’ would-be opponent, a LaRose spokesperson said. A LaRose deputy has been handling decision related to her candidacy for the same reason.

“We appreciate Justice O’Donnell’s work and service on this matter, and our team is currently reviewing his recommendation,” spokesperson Rob Nichols said.

Ohio Republican Party Executive Director Justin Bis brought the protest against Maras in his capacity as an Ohio voter. It comes in a year when dozens of mainstream GOP secretary of state candidates have faced challenges from deniers of the 2020 presidential result who seek to take over election administration.

Maras questions the legitimacy of the 2020 election and has promoted the QAnon conspiracy theory on her podcast, “Tore Says.” Her platform for secretary of state includes scrapping all voting machines and returning to exclusively paper ballots, according to her website.

O’Donnell’s ruling was only the latest in Maras’ rocky effort to make Ohio’s ballot.

LaRose certified her candidacy as an independent July 19. His office determined, based on reviews by county boards of elections, that she had submitted 5,010 valid signatures, 10 more than required. The complaint by the state Republican Party executive director alleged dozens were actually invalid.

Before Maras launched her campaign as an independent, LaRose’s office listed her among candidates back in February who had met the filing deadline to run in May’s Republican primary. But, days later, it said her petitions had fallen short by about half the 1,000 signatures needed and she didn’t qualify.

Maras had challenged that decision in court and lost.

LaRose ultimately won the Republican nomination in May over former state Rep. John Adams, who also questions the results of the 2020 election. In addition to Maras, LaRose faces Democrat Chelsea Clark, a suburban Cincinnati city council member and businesswoman, this fall.