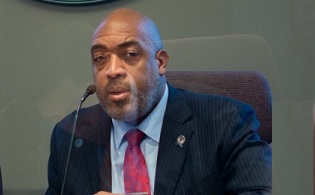 Cleveland City Council President Blaine Griffin said he is not breaking ranks with fellow Democrats to support Gov. Mike DeWine, despite a flyer that surfaced Wednesday listing him as part of a host committee for a fundraiser for the Republican governor.

The flyer includes Griffin’s name along with those of several East Cleveland Democrats as hosts of a reception for the DeWine-Husted campaign at a party center in the East Side suburb.

East Cleveland Mayor Brandon King is listed as the fundraiser’s lead host. A spokeswoman for the DeWine campaign confirmed that the flyer is authentic.

Griffin, who has endorsed Democratic candidate Nan Whaley against DeWine, said he never signed on to host a DeWine fundraiser. He said King invited him to a meeting with state officials, including the governor, to discuss a development project on the Cleveland-East Cleveland border near University Circle.

The council president said he agreed to attend that meeting, but had no indication that it was a fundraiser. He said he now has no plans to go.

A flyer provided to Ideastream Public Media advertises a fundraiser for Gov. Mike DeWine in East Cleveland. Cleveland City Council President Blaine Griffin, a Democrat, said he did not sign on to a fundraiser for the GOP governor.

In an interview with Ideastream Public Media, King said he mistakenly included Griffin on the political flyer. He said he and Griffin talked about both the fundraiser and a discussion with DeWine about development.

When Griffin agreed to a meeting, King mistook that for agreement to join the fundraiser, too, he said. King said he has since apologized to Griffin for the confusion and offered an apology to the DeWine campaign, too.

In the interview, King praised DeWine’s attention to East Cleveland, including the governor’s support for low-cost broadband in this cash-strapped city.

“You know we are in need of resources. This governor – red, blue, Black, green, white – has provided much-needed resources, and that’s what it comes down to,” King said.

“I am supporting a governor who has supported the residents of the city of East Cleveland,” he added.

Another person on the call, who did not identify himself, said King was given top billing on the flyer because he is the mayor, but that others had also worked to put the fundraiser together. The flyer requests donations ranging from $300 to $13,000, which is near the statutory maximum for political donations in Ohio.

Another local Democratic official listed on the flyer as a host, East Cleveland Council President Nathaniel Martin, said he does plan to attend the event Wednesday night.

Martin said that as a local elected official, he felt he ought to attend an event with the governor, even one of the opposite party. He commended DeWine for making multiple visits to East Cleveland, but said his attendance at the event shouldn’t be interpreted as an endorsement.

“I’m not planning to make any donations or anything like that,” Martin said. He later added, “I’m going because I think it’s going to benefit – you can quote me – the city of East Cleveland.”