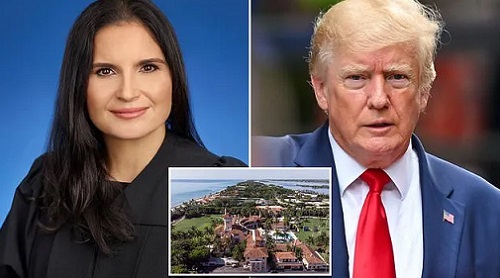 U.S. District Judge Aileen Cannon on Monday granted former President Donald Trump’s request for a third-party “special master” to review the more than 11,000 documents federal agents took from his Mar-a-Lago residence under a search warrant on Aug. 8, separating out any that may violate attorney-client privilege or executive privilege.

Cannon, nominated by Trump in 2020 and confirmed after his electoral defeat, also ordered the Justice Department to stop using the documents for investigative purposes in its criminal probe of Trump’s handling of highly classified government documents. She allowed a parallel intelligence community review of potential national security harm from the storage of top secret documents in a non-secure private club.

Legal scholars called Cannon’s ruling unprecedented, in the sense that it goes against decades of court precedent — especially expanding the special master role to include executive privilege potentially claimed by a former president over the executive branch, for government-owned documents the Justice Department argues Trump had no right to take or keep.

“To any lawyer with serious federal criminal court experience who is being honest, this ruling is laughably bad, and the written justification is even flimsier,” Duke University law professor Samuel Buell tells the Times. “Donald Trump is getting something no one else ever gets in federal court, he’s getting it for no good reason, and it will not in the slightest reduce the ongoing howls that he is being persecuted, when he is being privileged.”

Former Attorney General William Barr was more blunt. “I think it’s a crock of sh-t,” he told the Times on Friday. “I don’t think a special master is called for.” He made similar comments to Fox News, arguing that a special master is a “waste of time” and the FBI appears totally justified in seizing the documents.

Justice Department spokesman Anthony Coley said the DOJ is “examining the opinion and will consider appropriate next steps in the ongoing litigation.” If the department appeals Cannon’s ruling, the appeal would be heard by the Atlanta-based 11th Circuit, where six of the 11 active judges are Trump appointees.