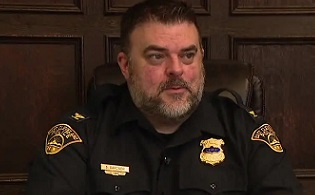 East Cleveland Police Chief Scott Gardner has been indicted on multiple charges related to alleged theft and fraud while in office, 3News has confirmed.

According to Cuyahoga County court records, Gardner is accused of the following offenses dating back as early as 2014:

When reached by 3News for comment, Gardner said the indictment was a “surprise” to him and directed us to his attorney, Kimberly Kendall Corral, who expressed similar shock.

“Had the news not reached out to put me on notice to check the docket, I wouldn’t know either,” Corral told 3News.

The county prosecutor’s office has also not spoken on the matter.

Gardner, 47, has been with the East Cleveland Police Department since 1999. During his tenure as chief, he has been one of the most visible voices in the city’s efforts to lower its violent crime rates, which remain among the highest in the state of Ohio.

This is not the first time Gardner has faced a criminal inquiry. In 2014, he faced multiple other charges including records tampering and filing false statements, but later pleaded guilty to lesser accusations of prohibition and tax violations. He was sentenced to five years probation and ordered to pay nearly $30,000 in restitution.

Gardner’s ordeal is just the latest for East Cleveland’s political scene. Earlier this month, the Cuyahoga County Board of Elections certified an effort to recall Mayor Brandon L. King, who was re-elected to a second full term just last year. Voters will decide on Nov. 8 if King should be removed from office, and if the recall is successful, City Council President Nathaniel Martin would assume the duties of the mayor’s office.

This is a developing story. Stay with 3News for more details as they become available.