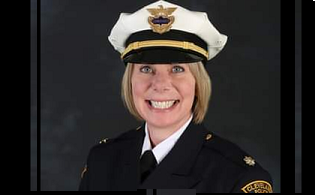 “I am proud to announce the appointment of Annie Todd as Deputy Chief,” said Police Chief Wayne Drummond. “I have watched Deputy Chief Todd’s actions over the course of many operations and have seen her perform at a high level as a district commander over the years. I am confident she is the right person for this role, and I look forward to working with her.”

Deputy Chief Todd has been with the Cleveland Division of Police since September 2000. She has held the ranks of Sergeant (2012), Lieutenant (2017) and Commander of the Third District (2019).

She has also received awards during her time with the CDP including the Medal of Heroism and the Distinguished Service Medal.

“Deputy Chief Todd is an effective and empathetic leader who has spent the last 21 years protecting and serving the city. We are delighted to recognize her accomplishments and welcome her to this new role,” said Mayor Justin M. Bibb. “We are also deeply grateful to Deputy Chief O’Neill for 30 years of dedicated service and outstanding leadership. We wish her all the best in her retirement.”

O’Neill retired last Friday after eight years as Deputy Chief and 30 years total of service with the Cleveland Division of Police.

“I have served the Division of Police alongside Deputy Chief Joellen O’Neill for many years and value our relationship as colleagues and as friends,” said Police Chief Wayne Drummond. “Joellen has served with great integrity and has always had the best interest of the City of Cleveland and Cleveland Police officers at heart. I will miss working with her and wish her the very best in her retirement.”