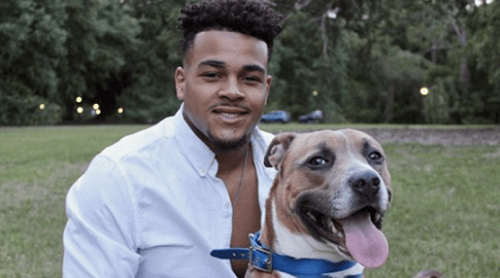 William “Marc” Wilson, who was recently convicted of involuntary manslaughter for a shooting that he says was in self-defense against a racist attack on a Georgia highway, was sentenced Tuesday to 10 years in prison – the most time allowed under state law. His family and lawyers say the case reveals a racial double standard for “stand your ground” laws.

“If you put me in Marc’s shoes, there’s no way that I would’ve been prosecuted,” Wilson’s cousin, Chance Pridgen, who is white, told Yahoo News. “Odds are I would’ve been given a medal — probably gotten a parade in my name. It’s unreal how he was treated just because he’s a little bit more tan than I am.”

Wilson, a biracial Black man, 21 years old at the time of the shooting on June 14, 2020, fired his legal handgun at a pickup truck of white teens who he says were yelling racial slurs at him and trying to run him and his white girlfriend off the road near Statesboro, Ga. One of those bullets struck and killed 17-year-old Haley Hutcheson, who was in the back seat of the truck.

After an emotional seven-day trial late last month in Bulloch County Superior Court, a jury found Wilson guilty of felony-level involuntary manslaughter. Wilson was acquitted on the other charges, including felony murder, which carried with it a potential life prison sentence.

Coming into Tuesday’s sentencing, Wilson’s defense was hoping for leniency from Judge Ronnie Thompson knowing that in Georgia, a felony manslaughter conviction carries a penalty of one to 10 years. The prosecution, however, pushed for the maximum sentence for Wilson’s “lack of remorse, his disdain, his attempts to manipulate the system,” according to James Woodall, public policy associate with the Southern Center for Human Rights, who live-tweeted the hearing.

“I would like you to remember that Marc Wilson saved my life that night,” Wilson’s ex-girlfriend, Emma Rigdon, told the judge Tuesday while on the stand. “I truly believe that if he didn’t do what he did, we would’ve both lost our lives that night. Marc is not the reason Haley is not here.”

In all, the defense called 11 witnesses to the stand for victim impact statements on behalf of Wilson, compared to just two from the prosecution. Wilson was granted time served for his pretrial detention, which means he’ll remain behind bars for at least another seven years.

It was not immediately clear whether Wilson’s attorneys will appeal the decision.

“We believe that this verdict is a verdict that speaks the truth,” Ogeechee Judicial Circuit District Attorney Daphne Totten said outside the court after the Aug. 31 ruling. “We ask juries every day to return verdicts that speak the truth, and the truth in this case is that what Marc Wilson did that night on the bypass was a crime.”

Prosecutors argued that Wilson did not need to fire his weapon, while the defense contends that he exercised legal self-defense under the state’s “stand your ground” law.

A number of states, including Georgia, have implemented the controversial laws loosening the restrictions on using deadly force when threatened, stating there is no duty to retreat first.

The case against Wilson was closely watched by legal experts and civil rights advocates who have long criticized the use of “stand your ground” laws as racist. Perhaps the most high-profile case of its kind was the 2012 shooting of Trayvon Martin, an unarmed Black teen. George Zimmerman, who killed Martin, successfully argued that the use of force was justified under Florida’s self-defense laws.

Studies have found a significant racial disparity in whether homicides are deemed to be justified, based on the race of the shooter and that of the person shot. A 2020 study by the U.S. Commission on Civil Rights said​​ “white-on-black homicides have justifiable findings 33 percentage points more often than black-on-white homicides,” with “stand your ground” laws exacerbating that disparity.

“This case, among so many others, highlights the urgency in why Georgia must address the racial disparity in Stand Your Ground claims,” Woodall said in a statement to Yahoo News. “It is troubling that people continue to have to defend themselves against violent behavior, only to be further criminalized by an unjust legal system.”

Wilson’s lead attorney was even blunter. Francys Johnson, a former president of the Georgia NAACP, said his legal team was tasked to stop a “legal lynching” in the case.

“Today this jury spoke as the voice of this community and said that Marc Wilson is no murderer,” Johnson said following the verdict. “They’ve always known that, and now this jury has spoken.”

Under Georgia law, manslaughter can be a felony or a misdemeanor depending on the circumstance. Wilson’s felony conviction carries a penalty of one to 10 years in prison, but Johnson says the judge chose not to instruct the jury on the misdemeanor option.

“If that option had been included as we asked and insisted, this jury would have found Marc guilty of the misdemeanor version of manslaughter and Marc would be coming home,” Johnson told reporters outside the courthouse, according to 11Alive, a local NBC affiliate.

Wilson says he fired in self-defense after Hutcheson’s friends yelled racial slurs from a pickup truck and tried to run his car off the road. (Bulloch County Sheriff’s Office via AP)

Neither Johnson nor the Ogeechee District Attorney’s Office responded to requests for comment from Yahoo News.

CJ Jenkins, an organizer and JustGeorgia coalition member who has been working as a liaison between the Statesboro community and Wilson’s legal team, says several important circumstances in the case supported the defendant’s case.

“[The teens] admitted to hiding evidence. They admitted to being intoxicated,” Jenkins told Yahoo News. “Whether it’s the DA sharing information with the judge or recalling the judge … it’s been an uphill battle.”

In February, a senior judge ordered Ogeechee Circuit Superior Court Judge Michael Muldrew, who was originally presiding over the case, to recuse himself from the trial for “disparate handling” of the case. The defense claimed that Muldrew met with two of the prosecuting attorneys in private to review emails Wilson sent to his family.

The conflicting accounts given by the teens who were in the truck on the night of the incident have also come into question. They maintained that they never yelled racial slurs that night, but they admitted that they had been drinking while driving around. At least one of them, 18-year-old Luke Harry Conley, was later charged with misdemeanor obstruction of justice for withholding information.

The 2020 shooting occurred just weeks after the murder of George Floyd, a Black man killed by a Minneapolis police officer. Wilson told detectives that he had been nervous about the confrontation and felt he had no other choice but to stand his ground when he shot at the truck.

“Me and my girlfriend were very scared that night,” Wilson told an officer after the shooting. “A truck full of — all I saw were white males — white males driving their car at me and are flipping me off and yelling racial slurs.”

Wilson, right, with members of his family. (Photo courtesy of the Wilson family)

Rigdon, Wilson’s former girlfriend, had been barred under a gag order from speaking out publicly on the case. She told Yahoo News that she was deeply frustrated with the way that the trial played out.

“My words have been twisted,” she said. “I’ve had to defend myself on the witness stand, because I’ve gotten treated like a monster.

The family, in the few interactions they’ve had, said they see a change in Wilson.

“I’ve seen him change from a little playful boy to a maturing young man,” SaJuana Williams, Wilson’s aunt, told Yahoo News. “He’s coming into his faith walk, because we truly believe that this whole ordeal is a lot bigger than our family. It’s a lot bigger than what the eye can see and even imagine.”

Rigdon says she will continue after Tuesday’s sentencing to stand by Wilson.