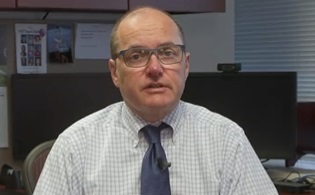 Cleveland Metropolitan School District announced last week that CEO Eric Gordon will be stepping down from his role at the end of the school year, after 11 years leading the district.

Cleveland Mayor Justin Bibb’s office confirmed the news in a press release, explaining the mayor’s office will “look forward” to partnering with the CMSD Board of Education on an “inclusive and effective search process for the new CEO that will include substantial input from the community.”

Bibb told Ideastream Public Media it was Gordon’s decision to step down.

The timing and conditions are right for the district’s transition to a new school leader, Gordon said in a news release.

“I will forever be proud of the work we have done over the past 11 years at CMSD and grateful for the role each of you has played in the District’s progress that I have every reason to believe will continue in the year ahead,” he said.

“Our collaboration led to improved outcomes for our students, safer schools, increased opportunities for student involvement in sports, the arts, and other activities,” she said. “The community has rewarded our efforts with their support demonstrated through the passage of a number of levies, including the most recent November 2020 levy.”

Gordon oversaw a significant period of transition and improvement at CMSD, and the news release from the mayor’s office recognized his work with community leaders to get state approval of the Cleveland Plan in 2012.

During his tenure, Gordon also collaborated with others on implementation of the Say Yes to Education plan that is providing free college tuition to all CMSD students. He shepherded operating levies and a bond issue onto the ballot that voters approved to fund school improvements. And he was present for all of the woes caused by the pandemic for students and staff.

Cleveland Mayor Justin Bibb told the education news website The 74 earlier this year that he wanted to rapidly improve the performance of the school district, and even said he was weighing whether Gordon was the best person to guide that work.

“We have to actively accelerate the pace of change inside the district,” Bibb told The 74 in May. “I will consider it a failure of mine as mayor, if in the next decade, we don’t improve the quality of learning in our school system.”

CMSD school board members are appointed by the mayor in Cleveland; in other parts of Ohio, they are elected positions. The board approved a four-year contract extension for Gordon in 2019, which is set to end in 2023. At the time, his base salary was $257,588.

Gordon’s legacy is intertwined with the implementation of the Cleveland Plan, which called for a sweeping series of investments and improvements in the school district to improve students’ poor education outcomes in the city. It also calls for high-quality charter schools in the city, with low-performing charters long being the subject of ire from public officials.

When asked about his stance on charter schools, Bibb said he wanted to improve the quality of public education options in general in the city, and wanted to “double down” on the Cleveland Plan.

“We’ve got to do a better job of increasing and improving access to high-quality public school options in the district,” he said. “We also need to make sure that they have the right in-school and out-of-school supports as well.”

The Cleveland Plan does call for improvements for public schools as well as “public charter schools,” which are non-profit charter schools run by non-public agencies that accept public funding and are regulated by the government. Bibb, in effect, is not closing the door on more charter schools in Cleveland.

Bibb also took issue with the assertion that Gordon stepping down was due to a difference of opinion with Bibb on charter schools.

“(That’s) completely false and disrespectful of Eric’s process to make this decision himself,” Bibb said. “My interest as mayor is to only continue the work that Eric has started with the community around the Cleveland Plan and to double down on the Cleveland Plan. And as you know, high-quality public charters have been a part of the Cleveland Plan for the last decade.”

Things have improved during Gordon’s tenure, according to a 2021 update on the Cleveland Plan’s progress. CMSD’s high school graduation rate increased from 64% to 80.1% between 2012-2013 and 2019-2020; the percentage of CMSD graduates who needed remediation in post-secondary math or English dropped from 76% to 53%; and Cleveland nearly doubled the number of young children enrolled in high-quality preschool during that time.

But Bibb said much more work is needed.

“When it comes to closing the achievement gap, particularly for Black and brown students, it’s never enough,” he said.