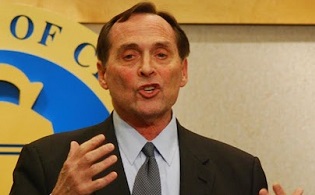 Several Republican former leaders from around Ohio are coming out in support of Democratic U.S. Senate candidate Tim Ryan as they condemn the actions of former President Donald Trump.

Phil Heimlich, former Cincinnati City Council member and Hamilton County Commission member, described himself as a staunch conservative who looks to the polices of former President Ronald Reagan as a guiding principle.

Heimlich said Vance’s alignment with Trump puts him at odds with the values traditional conservatives support, such as protecting democracy from election deniers, respecting the “rule of law,” and fighting against fascism.

Heimlich was joined by Chris Gibbs, former Shelby County Republican Party chair and president of Rural America 2020. Gibbs, who is now a registered Democrat, said Tim Ryan is a candidate who represents the values he used to look for within the Republican party.

“The GOP of today and the candidates that it stands for election are yet a shell of what the Grand Old Party used to be. Void of those guiding principles, diplomacy, statesmanship, compassion, personal responsibility,” said Gibbs.

The collection of Republican former leaders was sponsored by the Welcome PAC, a political action committee that supports Democratic candidates with the mission of expanding the party’s tent. The Welcome PAC has raised $2 million for their effort, with a lot of that money intended to go into Ohio races.

“This bogus organization isn’t ‘Republican’ — it’s a Democrat trick funded by a far-left super donor. Its members are donors to Tim Ryan, Pete Buttigieg, Joe Biden, and liberal PACs, and one member even served as a political appointee for President Obama. It’s a shame that these individuals have chosen to lie to Ohioans about who they really are,” Schroeder said.

Vance and Ryan are locked in a tight race, based on a collection of recent polls. The candidates are set to appear in two debates in October. The first debate will take place in Cleveland on October 10.