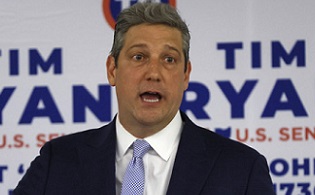 Polls in the race for Ohio governor show a double-digit gap between incumbent Republican Mike DeWine and Democratic challenger Nan Whaley. The election is still more than two weeks away, and experts aren’t ready to call that contest — or the much closer race for U.S. Senate, though they admit one might have an effect on the other.

But in an interview for “The State of Ohio,” Kondik also noted four years ago, Republican Mike DeWine won the governor’s race by less than a four percentage point margin against his Democratic opponent Richard Cordray, and Democratic U.S. Senator Sherrod Brown was re-elected by almost seven points in the same election against his Republican opponent Jim Renacci.

“You know, basically a 10% difference in margin between the governor’s race and the Senate race. I don’t know if it’ll be that dramatic this time, but it certainly could be,” Kondik said. “And certainly the polls that have shown the Senate race close and the governor’s race not close indicates that they’re picking up on some of these voters who might be splitting their tickets.”

But in that open U.S. Senate race, Kondik said while Democrat Tim Ryan has run a better campaign than Republican J.D. Vance in fundraising, he thinks the race is Vance’s to lose.

Ryan and Vance have participated in two debates during the month of October, one in Cleveland and the other in Youngstown. The two have also been traveling around the state, meeting with supporters and speaking at rallies.

In the race for Ohio governor, DeWine refused to participate in debates with Whaley and has kept a fairly low-profile compared to his previous campaigns. Whaley participated in a panel with the Columbus Metropolitan Club on Wednesday, an event which DeWine was invited to but did not attend. Whaley and DeWine are scheduled to appear in-person, together