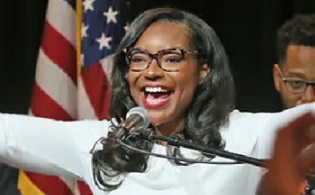 State Rep. Emilia Sykes has won the race for Ohio’s 13th congressional district. The race was thought to be one of the most competitive in the country, potentially determining control of the U.S. House of Representatives. It pit Sykes, a longtime Democrat and figure in Akron politics, against Madison Gesiotto Gilbert, a Republican newcomer and Massillon native.

Sykes declared victory at her election watch party at the Akron Civic Theatre.

“I am so excited to be a representative of this community that raised me,” Sykes said to a crowd of supporters as they cheered loudly.

Sykes mentioned to the crowd that she likes to go by her full name, Emilia Strong Sykes, to honor the names of her grandparents.

“I want to make sure that when I go to these spaces and places where people said I didn’t belong, that they know that Emilia Strong Sykes – the granddaughter of a sharecropper and farmers from Arkansas – [is] going to be in the most important democracy in this world, and I’m going to carry their names with me proudly,” Sykes said.

“This is obviously not the result we were expecting or hoping for tonight, but the fight goes on,” Gesiotto Gilbert said.

Analysis of results so far show Summit County to be a stronghold for Sykes, while Gesiotto Gilbert led in Stark County. The redrawn district includes all of Summit County for the first time in decades, as well as parts of Stark and Portage counties.

Sykes has deep roots in Akron politics. She’s represented the city in the Ohio House since 2015 and served as minority leader for two years. Her parents, Vernon and Barbara Sykes, are also longtime Akron politicians.

This was Gesiotto Gilbert’s first time running for office, but she wasn’t a newcomer to the political scene. She’s worked as a political commentator and served as the co-chair for the national Women for Trump organization. She also was endorsed by former President Donald Trump.

Sykes said the competition was tough, and she often had to put on a “brave face” while watching television ads from her opponent, saying they misrepresented what she stands for.

“But guess what? They messed with a kid from Akron,” Sykes said, referencing a well-known LeBron James quote.

Gesiotto Gilbert did not say what’s next for her but thanked her supporters.

“We would not be here without all of you. From the very beginning, so many of you stepped up to get us to this point,” Gestiotto Gilbert said.