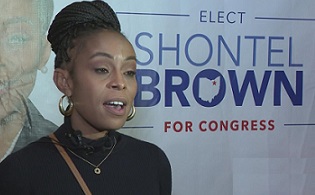 Brown, 47, is a Democrat from Warrensville Heights.

Brown was elected to the seat in a Nov. 2, 2021, special election after former District 11 Rep. Marcia L.

Fudge resigned from her seat on March 10, 2021, to become the U.S. Secretary of Housing and Urban Development under President Joe Biden. She had held the seat since 2008, which had remained empty until Brown’s appointment.

According to a previous Cleveland Jewish News interview, Brown plans to continue to “put the people of the district before politics and to be a unifier in Congress, working across the aisle to fight for workers’ rights, women’s reproductive, human and civil rights to address health and income disparities.”

Brewer, 68, is a Republican. He is a writer and the former mayor of the city of East Cleveland.

District 11 encompasses all of Cleveland, some eastern suburbs, the city of Lakewood and about 30 other cities.