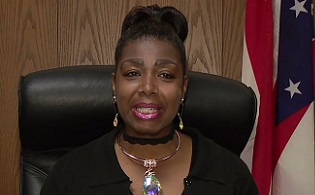 The Ohio Supreme Court on Tuesday removed from the bench a Cleveland municipal judge for misconduct that included lies, disrespectful treatment, falsifying court documents and wearing tank tops and spandex shorts in court.

Judge Pinkey S. Carr was indefinitely suspended, and she agreed to undergo evaluations for her mental and physical health.

The court said that Carr’s bench was littered with junk, dolls, cups and novelty items − her own attorney described it as “resembling a flea market.” She wore tank tops, T-shirts, spandex shorts and sneakers to court. And she discussed with staff and defendants a television show called “P-Valley” about a fictional Mississippi strip club.

Carr joked about accepting kickbacks for lenient sentences if defendants gave her food, beverages, carpeting or storage space. She referred to her bailiff as “Miss Puddin from P-Valley.”

In addition to a lack of decorum, Carr was found to have violated a long list of other rules: