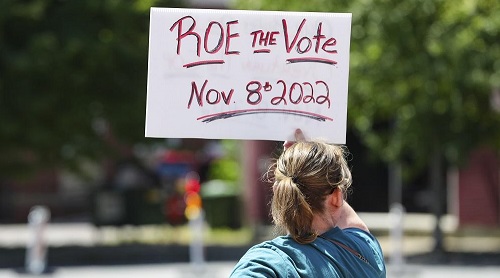 Before the stunning results of this year’s midterm elections, many pundits and analysts expected a “red wave” with overwhelming vote margins for Republican candidates for Congress and other offices. This did not occur. Instead, Republicans will gain, at best, a few seats advantage in the House of Representatives, and will still be the minority party in the Senate.

In order to better understand how Democrats avoided big losses in the 2022 midterms, this analysis examines Democratic minus Republican (D-R) vote margins using 2022 exit polls data and those of earlier elections compiled by Edison Research.[1][2] They show that among people voting for House of Representatives candidates, key demographic groups that traditionally favor Democrats (young people, women, racial minorities, and white female college graduates) played a significant role—but only some of these groups showed as strong or stronger a D-R margin than was the case in the 2020 presidential election or previous midterms. Especially notable among these groups were young adults. In contrast, groups long associated with former President Donald Trump’s base (such as older voters and white male non-college graduates) stayed with Republican candidates. (Comparisons of national group D-R vote margins across recent elections can be found in downloadable Table A.)

This analysis also looks at D-R vote margins for demographic groups in states with competitive Senate or governor’s races. While most national demographic voter patterns hold, there are key differences across states. Some of these are accentuated in elections with strong partisan results, such as the gubernatorial contests in Pennsylvania and Florida. (Demographic groups’ D-R vote margins for select Senate and governor’s elections, respectively, are found in downloadable Table B and downloadable Table C.)

Among the youngest Americans, Democrats have held an advantage in votes for House of Representatives candidates in every midterm or presidential election since the late 1990s. Yet in 2022, the 18- to 29-year-old age group (made up of Gen Z and the youngest millennials) showed an even more pronounced shift toward Democrats. It is one of the few demographic groups to show a higher D-R margin in the nationwide House vote than for the 2020 presidential election (D-R value of 28 in 2022, compared to 24 in 2020). This is amplified by the fact that this age group—as in the 2018 midterms and 2020 presidential election—registered a rise in turnout compared to pre-2018 elections, according to a Tufts University analysis.

Especially important to this youth vote is the contribution of young women. Prior to last week’s election, there was much speculation about how the Supreme Court’s decision to overturn Roe v. Wade would affect women’s voting patterns. The new exit polls show that 47% of female voters felt angry about that decision, and 83% of those women voted for a Democratic candidate.

It is worth noting that while men overall voted Republican, men ages 18 to 29 showed a positive D-R margin of 12. Among voters over age 45, both men and women were less likely to vote Democratic in 2022 than in 2020. Thus, a good part of the women’s vote for Democrats was accentuated by young people.

For several decades, white Americans as a group have favored Republicans in presidential and midterm elections, while at the same time Black Americans strongly favored Democrats.[3] Latino or Hispanic Americans, while favoring Democrats in recent elections, show inconsistent D-R vote margins over time and across different parts of the nation; their D-R margin has ranged from 12 to 48 since 2000.

Asian American voting preferences are even more mixed, favoring Republicans in some 1990s elections before trending toward Democratic support in the 2000s (except in the 2014 midterms, when they registered a negative D-R margin).

The 2022 exit polls show a continuation of these differences, with white voters favoring Republicans, though only slightly more than in the 2020 presidential election and less so than in the 2014 midterms. Black voters show continued high D-R vote margins, while Latino or Hispanic and Asian American voters showing more modest margins (though each vary across different states and nationalities).

More notable than the overall D-R vote margins by race are those for youth voters in those groups. This is especially noteworthy among white voters, with 18- to 29-year-olds favoring Democrats, in contrast to older white voters. Although young white voters favored Democrats in both the 2020 presidential election and 2018 midterms, their D-R margin in 2022 was even higher (see downloadable Table A). Meanwhile, the D-R vote margins for Black and Latino or Hispanic youth were higher than any other age group (and 2022’s Black youth D-R vote margin was higher than that of the 2020 presidential election).

An important reason for focusing on young voters and the outsized Democratic margin among Black and Latino or Hispanic youth has to do with the highly diverse demographic composition of this age group. As Figure 5 indicates, white people now comprise just 56% of eligible voters ages 18 to 29, with the rest comprised of people of color. As voters in this age group advance into older ages and the overall U.S. population becomes more diverse, it signals good news for Democrats.

At the same time, white men without college degrees showed increased Republican support, even more so than in the 2020 election. And as this analysis will later show, they also anchored Republican support in several Senate and gubernatorial elections.

The national D-R vote margins for House of Representatives elections are broadly consistent with outcomes in competitive state elections, though they contributed in different ways consistent with Democratic or Republican victories. Looking at Senate elections in eight states (Ohio, Pennsylvania, and Wisconsin in the North; Florida, Georgia, and North Carolina in the South; and Arizona and Nevada in the West), it is clear that most show the same broad age, gender, race, and education D-R vote margin patterns discussed above, with some variations in intensity (see downloadable Table B).

All eight of these states display Democratic advantages among voters under age 45 and Republican advantages for those over age 45, with especially strong D-R vote margins for the 18 to 29 age group. Still, there are variations across states, even with the younger group. For example, Gen Z and young millennial voters registered especially high Democratic margins in Arizona, Pennsylvania, Wisconsin, and Nevada—three of which saw Democratic wins in Senate races (in Wisconsin, the exception, Republican Ron Johnson scored a narrow victory over Democrat Mandela Barnes). Also, in each of these four states, the D-R margin for voters under age 45 was higher than it was in the 2020 presidential election.

Gender differences in D-R vote margins were broadly consistent with national patterns: women voting Democratic and men voting Republican. But there was one exception: In Florida’s Senate race, won handily by Republican Marco Rubio over Democrat Val Demings, women showed a slight Republican advantage. Florida was one of two of these eight states where white college graduate women voted Republican (Georgia being the other).

With respect to the two largest racial minorities—Black and Latino or Hispanic voters—only the latter showed wide voting variations across these eight states. As Figure 8 shows, high D-R margins among Black voters—ranging from 69 in Nevada to 88 in North Carolina—made these voters a strong part of the Democratic coalition in both winning and losing states.

In contrast, Latino or Hispanic D-R margins varied widely across states, with the most stunning result in Florida, where Republican Marco Rubio had a 15-point advantage among this group over Democratic challenger Val Demings. (In 2020, Florida’s Latino or Hispanic voters modestly favored Joe Biden for president.) Democrats received solid to strong (D-R margins of 18 or higher) Latino or Hispanic support in Senate elections in most other states, especially in Wisconsin, Pennsylvania, and Nevada.

Perhaps most decisive in distinguishing competitive states with Republican Senate wins was the relative strength of a traditional Trump constituency: white male non-college graduates, particularly in states where other groups did not provide a Democratic counterbalance. In Florida, in particular, the already strongly Republican D-R ratio of -37 from the 2020 presidential election increased to a whopping -54 margin in 2022, which overwhelmed modest voting changes in other white groups. This group also registered strong Republican margins in North Carolina (-59), where Republican Ted Budd defeated Democrat Cheri Beasley for Senate. And although this group also predominantly voted Republican in Georgia (-61), strong Democratic margins among young, Black, and Latino or Hispanic voters helped to close the gap, resulting in an upcoming runoff election between Democrat Raphael Warnock and Republican Herschel Walker.

While all states showed a Republican advantage for white non-college voters, white college graduate women along with other Democratic-leaning groups served as counterweights in states where the Democratic Senate candidate prevailed (Pennsylvania, Arizona, and Nevada) or came close (Wisconsin). However, this was not the case in Ohio, where white college graduate women and young people showed more tepid Democratic support, leading to Republican J.D. Vance’s victory over Democrat Tim Ryan.

At the other end were three southern states (Florida, Georgia, and Texas) taken by Republican candidates. Each of these showed dominant Republican margins for white male non-college graduates, with smaller or negative support from groups that voted Democratic in the northern states.

Two western states with close outcomes in their gubernatorial races—Arizona, won by Democrat Katie Hobbs, and Nevada, won by Republican Joe Lombardo—showed a combination of these partisan forces, with strong Democratic youth support in both states and higher Democratic support from white female college graduates in Arizona.

Two extremes among these states occurred in Pennsylvania and Florida. In the former, Democrat Josh Shapiro beat Republican Doug Mastriano with extraordinary support from young, female, Black, and Latino or Hispanic voters and all white groups except white male non-college graduates. In contrast, Republican Ron DeSantis beat Democrat Charlie Crist in Florida with outsized support from voters over age 45 and white male non-college graduates, as well as overall support from women, all white groups, and Latino and Hispanic voters. These reflect the particular appeal of these candidates as well as voting blocs.

What these results mean for the future

It must be said that the 2022 midterms were unusual in a number of ways. It was the first midterm election to occur since the COVID-19 pandemic, and took place during volatile economic conditions with a low approval rating for the incumbent president. It was also only months after the Supreme Court overturned Roe v. Wade, leading to fears among many voters about future access to abortion. It also came in the wake of the January 6 committee’s investigation into the assault on the Capitol, which inflamed both negative and positive voter opinions about former President Trump, who endorsed many midterm candidates.

Still, the demographic patterns revealed by these exit polls hold some expectations for the future. Perhaps most important is the strong Democratic support from young people—men, women, and people of color—to a level that most analysts did not predict. For a variety of reasons—including concerns about abortion, inclusivity, democracy, and education—it seems likely that Gen Z and young millennials will become the future core of the Democratic coalition.

Second, these midterm results show continued Democratic support among women, especially white women with college degrees—support that was clearly fanned by the recent Supreme Court decision, among other issues.

Third, although much has been made of people of color’s recent trend toward Republicans, the 2022 results show that for the most part, Black, Latino or Hispanic, and Asian American voters (especially young ones) favor Democrats.   While it is certainly true that Latino or Hispanic voters show variability in their Democratic support by nationality and geography (supporting Republican candidates in Florida in this election, for example), they were also instrumental in forging Democratic victories in Arizona, Nevada, and Pennsylvania.

In short, these midterms revealed Democrats’ strength among new generations of voters and demographic groups that will continue to grow in size, while Republicans continue to do well with older voters and white men without college educations. And while the latter voting bloc continues to decline in size, it is still substantial in many states. The question these results raise, then, is whether the blocs that strongly supported former President Trump in the past will retain enough clout to counter future gains among groups that favored Democrats this time around.