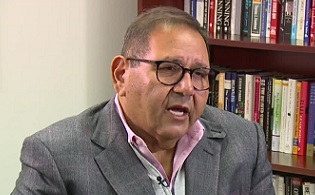 Dr. Akram Boutros, a day after his firing as CEO by the MetroHealth System board of trustees, told Ideastream Public Media he did nothing wrong and is considering legal action.

The board said Monday Boutros paid himself nearly $2 million in improper bonuses, and the Cuyahoga County prosecutor’s office is now investigating.

Boutros said the bonuses were proper and the board’s actions, including forcing him to pay the bonuses back with interest, are retaliation because he blew the whistle on improper hiring practices in the board’s selection of his successor.

“I’ve had a ten-year career at MetroHealth, I have taken care of the most needy individuals, the 8,000 employees of the Metro system. I’ve done an extraordinary job and to put all of that into jeopardy because of the board interest not to take responsibility for their own action is just for me, is the saddest day I’ve had in my career,” he said.

Boutros said he returned the money with interest last month, even though he felt the bonuses were appropriate.

“I explained to them in writing that I was doing this not out of a sense of wrongdoing, but out of a sense to expedite the matter and to have their assessment be done independently,” he said.

Boutros said this month the board changed the CEO’s supplementary compensation to be different than the rest of the executives, but it had not been framed that way in the past nine years he’d been there.

“They’ve never asked for details of [my bonuses.] There is 180 eligible people. We use the same exact formula for everyone. Everyone does a self-assessment. Then it’s looked at again and adjusted as necessary,” he said. “There are years in which I received a lower percentage than some of my executives because they performed better. So it’s an objective criteria.”

MetroHealth said it fired Boutros late Monday night for taking the bonuses without approval from the board of trustees. He was scheduled to step down from the health system next month after a nearly decade-long turn at the helm, where he oversaw a $1 billion overhaul of the hospital’s main campus.

In the statement, the board said it had not authorized Boutros’ payments and had not agreed to allow him to pay himself based on metrics he set.

“We know of no organization permitting its CEO to self-evaluate and determine their entitlement to an additional bonus and at what amount, as Dr. Boutros has done,” the board’s statement said.

In a statement from his attorney, Boutros said he was fired as retaliation for blowing the whistle on improprieties in the way the board hired its new CEO.

“[Boutros] uncovered that the Board members were participating in serial deliberation outside of public meetings and that the Chair signed agreements and authorized payments without Board approval,” Boutros’ attorney, Jason Bristol, said in a statement.

In an email statement, O’Malley’s spokesperson said the prosecutor’s office is in contact with the Ohio Ethics Commission to review whether any laws were broken when Boutros collected the bonuses between 2018 and 2022.

The prosecutor’s office would not give any further details.