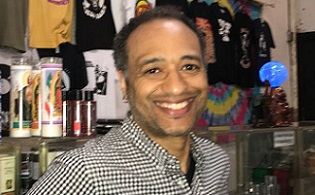 Hailed as the oldest independent record store in Ohio – and possibly the nation — Record Revolution in Cleveland Heights is closing its doors at the end of the year.

In an announcement on its Facebook page, management said it made the decision after “much calculation, consideration, & deliberation.” Reduced hours begin Nov. 28.

Rob Love has worked at the store since 1989, and became a partner in 2004. He said their lease is up and they do not plan to negotiate a new one. In the future, he’s considering reimagining the operation — possibly online — but it’s too soon to know.

“People have to support the stores they love and vote with their wallets,” he said. “Every action counts and every sale counts.”

The store has been a musical and cultural hub on Coventry Road since it opened in 1968 under owner/manager Peter Schliewin, who passed away in 1983. Cleveland Historical notes the store’s opening as signifying the area’s transformation “from a largely Jewish business district into one that catered more to a younger generation of hippies and bohemians.”

Through the 1970s and 80s, the operation grew in size to include several storefronts and even an operation in Parma. Former WMMS radio Program Director John Gorman credits the store with supporting acts like Queen, Elvis Costello and Patti Smith before they were well known. Over the past 20 years, the store has increasingly concentrated on apparel and vape accessories in addition to vinyl. However, it was also recently named Best Record Store in Cleveland by “Cleveland Scene,” an award it’s won several times since 2000.

In the announcement on Facebook, the store shared, “This decision did not come easily. We have enjoyed being a member of the Coventry community with it’s spirit of entrepreneurship, diversity, & encouragement of free thought and expression, for 55 years. Through those years, we have made many fond memories & personal connections with you, our valued customers. Without your support we never would have made it this far. So, a sincere & heartfelt thank you to all of you for this amazing experience of a lifetime!”

Record Revolution will begin reducing its hours. The last day of business is Dec. 31.