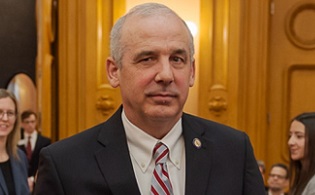 Facing a looming ballot battle, Republican lawmakers are poised to clarify exceptions in the state’s six-week abortion ban rather than ban the procedure entirely before the end of the year.

Ohio Senate President Matt Huffman, R-Lima, said that it’s “highly unlikely” that lawmakers will ban abortion from the point of conception this year. But expect some legislation aimed at clarifying when doctors can perform abortions to save the mother’s life.

“The General Assembly has been looking at how you make that clearer and I think that is good,” Gov. Mike DeWine said Wednesday. Going farther could end in a ballot battle. “I would hope that the General Assembly would pass something that could last and that would not be overridden by the vote of the people.”

Advocates of abortion rights say they will ask voters to approve a constitutional amendment to protect abortion access, likely in either 2023 or 2024. But the ballot fight could be accelerated if Republicans passed a near-total abortion ban, prompting a referendum to block it.

The debate on when and how to ban abortion in Ohio comes after the U.S. Supreme Court overturned Roe v. Wade, which allowed abortions up until viability, usually between 23 and 26 weeks gestation. But the Dobbs v. Jackson Women’s Health Organization decision in June sent decisions about abortion access back to the states.

Hours after that decision, DeWine and Attorney General Dave Yost asked a federal judge to implement the state’s 2019 law, which banned doctors from performing abortions after cardiac activity was detected. Supporters call it the “heartbeat bill.” Opponents say that’s a misnomer because the heart doesn’t fully form until later.

“This notion that they are somehow going to make this dangerous legislation into something that won’t harm people, if it’s allowed to go into effect again, is preposterous,” Copeland said.

Ohio Right to Life President Mike Gonidakis said opponents of abortion will continue to fight for banning the procedure at conception.

“We’re in this for the long haul. The pro-life movement is not on a timeline that has to deal with the legislative process,” said Gonidakis, adding that GOP lawmakers and politicians are in alignment. “We want to end abortion.”

A group of GOP lawmakers stood at a rally outside the Ohio Statehouse in October, promising to ban abortion entirely. “Life does not just begin at the time the heartbeat is detected. Life begins at conception,” Rep. Jena Powell, R-Arcanum, said at the time.

DeWine made his stance clear Wednesday, saying: “I’m for saving lives. I believe that we’re dealing with a human being here and I think that we should do everything that we can to save innocent lives.”

Republicans will control more seats in the Ohio Legislature next year, making it easier to pass legislation against Democrats’ wishes and for those bills to take effect right away. Ohioans voted using House and Senate maps that the Ohio Supreme Court ruled unconstitutional.

Copeland said that means threats to abortion access will continue. “It’s not like they’ve changed their agenda. They are just trying to figure out the most advantageous move in their political game.”

Jessie Balmert is a reporter for the USA TODAY Network Ohio Bureau, which serves the Akron Beacon Journal, Cincinnati Enquirer, Columbus Dispatch and 18 other affiliated news organizations across Ohio.