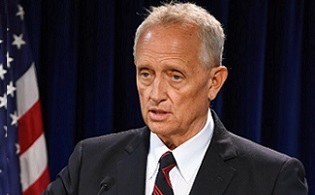 Gov. Mike DeWine has appointed named Hamilton County Prosecutor Joe Deters as his appointment to the Ohio Supreme Court to fill the vacancy left behind by Justice Sharon Kennedy who will assume the position of chief justice.

Joe Deters is Hamilton County’s longest serving prosecutor. He worked in that post from 1992 to 1999 before taking over as state treasurer for two terms.

Deters then returned to the prosecutor position in 2005 where he has kept that office up to his appointment to the supreme court.

“Joe Deters has the right combination of experience, legal knowledge, and passion for public service that will serve the citizens of Ohio well as an associate justice of the Ohio Supreme Court,” DeWine said in a statement announcing the appointment.

DeWine said Deters — a fellow Republican — is a “well-regarded” public servant who is known for his “legal intellect, reverence for the rule of law, and his accessibility.”

Over his tenure, Deters has cultivated a “tough on crime” reputation. He continued to seek the death penalty for the county’s murder cases even as the state put a hold on executions and lawmakers sought to repeal capital punishment.

This year, Deters vocally supported a constitutional amendment to allow judges to consider public safety when setting bail. He even appeared at the Ohio Statehouse to testify for the resolution.

“I have spent my entire career standing up for victims and protecting the rights of criminal defendants. I appreciate the trust and responsibility that comes with this appointment and look forward to working with my colleagues on the supreme court to ensure Ohio’s justice system protects the rights of all Ohioans,” Deters said in a statement.

Deters will be sworn in on Jan. 7.

He will finish the term of Justice Sharon Kennedy which ends in 2024. Kennedy is taking over as chief justice for Maureen O’Connor who had to leave the bench due to age limits.

Kennedy defeated Jennifer Brunner, a fellow associate justice, in the November election. Brunner will continue to serve on the bench.

The appointment of Deters means Republicans will retain a four to three majority on the court.