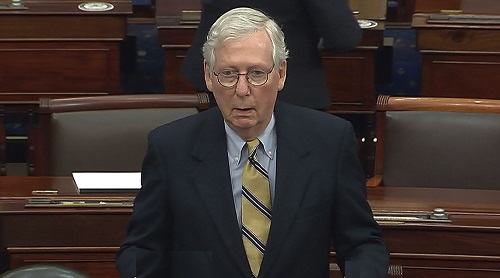 Senate Minority Leader Mitch McConnell has issued a brief but bold response to the decision of the Jan 6 committee to refer former president Donald Trump for criminal charges.

“The entire nation knows who is responsible for that day. Beyond that, I don’t have any immediate observations,” McConnell said, reacting to the panel’s vote to refer four criminal charges against Trump to prosecutors for his role in the January 6th, 2021 attack on the U.S. Capitol building.

McConnell has been far more outspoken than other members of his party, with Senate Republican Policy Committee Chairman Roy Blunt (Mo.) saying that he “had no idea” of the details of the referral.

Incoming Senate Republican Conference Vice Chairwoman Shelley Moore Capito addressed the decision more diplomatically, saying, “I never heard of Congress instructing [the Justice Department] in that way.” She did add though that the work of the committee was “obviously politicized,” suggesting that she doesn’t fully agree with the decision. Another Republican Senator, Rick Scott, openly disagreed with McConnell’s comment that the “entire nation” knows who is responsible for the events of Jan 6th, 2021, saying “I haven’t seen a poll like that.”

This isn’t the first time Senator McConnell has spoken out against Trump, as he previously slammed the former president after he was acquitted of his impeachment charge of inciting insurrection in February 2021, even though he voted to acquit Trump since he technically no longer held office.

“There is no question that President Trump is practically and morally responsible for provoking the events of that day,” McConnell said. “The people that stormed this building believed they were acting on the wishes and instructions of their president,” he added. “A mob was assaulting a Capitol in his name. These criminals were carrying his banners, hanging his flags, and screaming their loyalty to him.”

After an 18 month long investigation, the House select Jan 6 committee officially decided on Monday December 19th that the twice-impeached former president should be referred to the Department of Justice for prosecution for allegedly violating not one, but at least four sections of the US criminal code!

What Have The Committee Recommended?

Members of the panel voted unanimously to refer Trump and several of his associates to the Department of Justice on charges of obstructing an official proceeding, conspiracy to make a false statement to the US Government, conspiracy to defraud the United States and conspiracy to aid or comfort those involved in an insurrection.

Although there is no legal weight to this decision – this is only a recommendation from the committee for the DoJ to act on – the panel are hopeful that the investigators at the Justice Department will use all of the evidence and statements collected by the House committee to support their prosecutions moving forward. Rep. Jamie Raskin, D-Md. – a member of the panel who previously served as the lead manager in Trump’s second impeachment trial – told

“It’s of special concern when there’s an attempt to overthrow our election and essentially subdue our constitutional order and have someone seize the presidency who didn’t win it,” he said. “And if members of Congress have knowledge of that and may have been involved in it but refuse to say anything about it, we’re setting a precedent for future attacks on democracy itself. And that’s really the burden of our committee, to make sure that we prevent coups, insurrections, electoral sabotage and political violence in the future.”

What Does This Mean For Trump?

The consequences could be huge for the former president if the Justice Department does decide to pursue the charges, as being found guilty of giving aid to an insurrection would permanently bar him from running for office again! Not what he will want to hear having announced his third campaign for the White House just last month.

Trump will surely be starting to worry about the other investigations too now he has been recommended for prosecution here. The former president is of course adamant that he has done nothing wrong, and has denounced this investigation – as well as the others into his retention of official documents at his Mar-a-Lago estate and his efforts to overturn the election results in Georgia – as politically motivated. However the evidence is starting to stack up against him, and the panel’s chairman, Mississippi representative Bennie Thompson, described how Trump went against American democracy following the last election.

“To cast a vote in the United States is an act of faith and hope,” Thompson said. “When we drop that ballot in the ballot box, we expect the people named on the ballot are going to uphold that end of the deal. The winner swears an oath and oppose it. Those who come up short ultimately accept the results and abide by the rule of law.”

Thompson added: “That faith and our system is the foundation of American democracy if the faith is broken, so is our democracy — Donald Trump broke that faith, he lost the 2020 election and knew it, but he chose to try to stay in office through a multi part scheme. to overturn the results and block the transfer of power.”