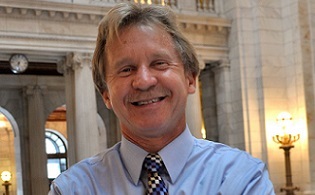 Kelly will fill the seat of Brian Mooney, who defeated a longtime Republican common pleas judge in last November’s election!

Council approved the appointment at a noon caucus meeting this month.

Kelly is a retired construction worker with Laborer’s Local 310 who now works for the Cleveland Metropolitan School District. He is active and well-liked in the Cuyahoga County Democratic Party, and council members gave him a warm welcome at the caucus meeting.

Kelly compared serving on council to his time working on skyscrapers, telling members that the buildings only come together if all of the trades do their part.

“I raised four kids with a union book in my back pocket and will work hard for the residents in the ward,” he said in a statement released by council’s press office Monday afternoon.

Mooney, who recommended Kelly as his successor, told council colleagues that many people contacted him interested in the job. He interviewed candidates before settling on Kelly. Also among those considered for the vacancy was county party chairman David Brock.

“I wanted somebody who’d be excellent at constituent service,” Mooney said, adding that Kelly was a man of “grit” and compassion.

Council traditionally approves an outgoing member’s recommended replacement. Members voted on Kelly’s appointment after invoking the “unit rule,” which requires unanimity from caucus members when they cast their votes on the floor of council.

Kelly is the son of mobster Danny Greene and was 17 years old when his father was killed in 1977. In a 2002 interview with the Plain Dealer, he credited late Cleveland police officer Edward Kovacic – who would go on to become police chief – with helping him follow a different path in life.

Ward 8 Council Member Michael Polensek – who represents the Collinwood neighborhood, where some of Kelly’s family still lives – said he was proud to vote for Kelly.

“Your concern, as you indicated, for kids is indisputable,” he said, referring to Kelly’s work with CMSD families.

A father of four, Kelly lives on Cleveland’s West Side in Ward 16, two blocks outside of the Ward 11 boundaries. The city charter does not require council members to live in the wards they represent – but if they do live in the ward, they forfeit their offices if they move out.

Mooney was appointed to council in 2020 and won a four-year-term in 2021. A Democrat, he narrowly defeated Republican Judge Joan Synenberg last November. Cleveland will hold an election this fall to fill the remainder of Mooney’s term in Ward 11.