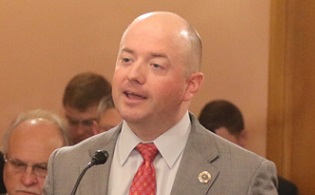 A resolution to require constitutional amendments receive 60% of the vote to pass is receiving renewed opposition from voting rights groups and community organizations.

A coalition of more than 140 groups protested against the resolution last year. They said it threatens the ability for citizens to create policy by sidestepping the legislature and take an issue directly to voters.

That measure, House Joint Resolution 6, did not come up for a vote before the end of session. However, House Republicans have reintroduced the resolution with new requirements.

Along with changing the threshold for approval from a simple majority to a three-fifths majority, the new resolution would also change the requirements for signature gathering to even put a constitutional amendment issue on the ballot.

The new rules would mandate that signatures are gathered in all 88 counties and would eliminate the 10-day cure period that allows petitioners to gather more signatures if their initial drive falls short.

“There’s no need to make this process harder,” Miller said. “This attempt to make ballot initiatives harder is unfair. It’s undemocratic. It’s unnecessary. And it is completely out of step from the freedom that Ohioans have had for over 100 years to collect signatures and pass ballot initiatives.”

House Republicans said the resolution will protect the constitution from the agendas of special interest groups.

Rep. Brian Stewart (R-Ashville) is the lead sponsor of the resolution. He said the standard should be raised for something as important as changing the constitution.

Stewart said changing the signature requirements is part of that new standard.

“If an amendment is going to apply to every Ohioan, then every community should have a hand in putting that potential constitution amendment on the ballot,” Stewart said of requiring signatures to be gathered from every county in Ohio.

Lawmakers have to pass the resolution by Feb. 1 to get it onto the May ballot.

There is concern among supporters that newly-elected House Speaker Jason Stephens (R-Kitts Hill) will not move the issue forward in time.