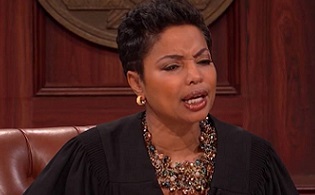 Faith Jenkins is set to replace Lynn Toler as the new Divorce Court judge effective July 2020. Judge Toler, 60, has presided over the long running syndicate program for 13 years from 2006-2019.

The Divorce Court is distributed by Fox First Run and produced by Lincolnwood productions. It was re-launched in 1999 following the exit of Mablean Ehriam (1999-2006).  The series is also planned to relocate to midtown Atlanta, at the Georgia public Broadcasting Studios.

Divorce Court has a record of being the longest running court show on television since back in the late 1950s. Initially actors used to re-enact real divorce proceedings for television, but today the program showcases real people and real cases.

Executive vice president of programming for Fox Television Stations, Stephen Brown, said in a statement on Thursday, “We are confident that Judge Faith’s energy and passion for each case will build on the legacy of this program created by the exceptional talents of Judge Mablean and Judge Lynn Toler.”

Judge Faith has for 14 years served as a barred attorney in New York. To kick off her career, Faith was a prosecutor at the Manhattan District Attorney’s office.  She was also an attorney at Sidley Austin, one of the top law firms in the nation.

“I started watching ‘Divorce Court’ in law school, so to be now joining the show is quite surreal. My legal expertise combined with my personal life experience – including years of dating in the world of social media and technology – provides me a unique perspective that will inform my empathy and judgment for many of the issues couples raise on the show,” Jenkins said.

The departure of Judge Toler from the long-running reality series announced in a video posted on Twitter on Thursday.  The 60 year old Judge, Toler has had many fans hitched to the series over the 13 years. And knowing that her fans are sure to feel saddened by her exit, she asked them to embrace Faith as she takes the role. “I couldn’t wait any longer because the news is coming out and I wanted you to hear it from me. I’ve left Divorce Court, we parted ways. I had 13 great years. It was time to move on,” Toler said.