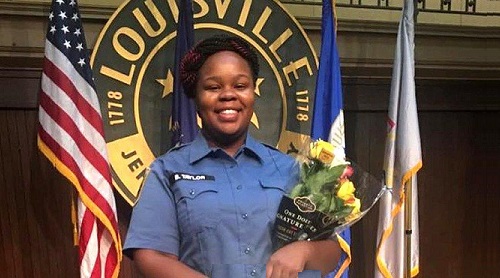 Breonna Taylor, a 26-year-old EMT worker in Louisville, Ky., was shot in her bed after midnight on March 13 by three police officers serving a “no-knock warrant,” becoming another statistic in the long list of African-Americans killed at the hands of police. What makes the case unusual is that Taylor was a woman.

And, of course, she was asleep.

The incident is still being investigated and Taylor’s family is suing Louisville Metro Police Department Officers Myles Cosgrove and Brett Hankinson and Sgt. Jonathan Mattingly alleging wrongful death, excessive force and gross negligence. According to the suit, the police fired more than 20 rounds in the apartment. Taylor was hit eight times and pronounced dead at the scene.

The officers were looking for a drug suspect who lived 10 miles away and was already in police custody, according to the Courier-Journal. Police said the suspect had used the address where Taylor lived with her boyfriend, Kenneth Walker, to receive packages in the mail. No drugs were found in the apartment, and neither Taylor nor Walker has an arrest record.

The warrant contained a “no-knock” provision, which allows police to enter a home without identifying themselves. Officers said they knocked on the door several times and “announced their presence as police who were there with a search warrant.” But when no one came to the door, the police forced their way in and “were immediately met by gunfire,” Lt. Ted Eidem said at a March 13 press conference. One officer was shot and wounded in the leg.

The shot was fired by Walker, who, according to his lawyer, was licensed to have a firearm and fired in self-defense, believing the intruders were burglars. Walker has been charged with first-degree assault and attempted murder of a police officer.

The department has declined to answer questions on the case, citing an ongoing investigation. No body-camera footage is available from the incident, since officers in the Criminal Interdiction Division, who conducted the search warrant, do not wear cameras, LMPD Chief Steve Conrad said. None of the officers involved have been charged in connection with the shooting.

Taylor’s mother, Tamika Palmer, filed the lawsuit in April in Jefferson Circuit Court. “Breonna had posed no threat to the officers and did nothing to deserve to die at their hands,” the lawsuit reads. “Shots were blindly fired by the officers all throughout Breonna’s home.”

The incident gained little national attention for weeks, as the country has been preoccupied with the coronavirus pandemic. Taylor’s sister, Ju’Niyah Palmer, has been on social media posting pictures of her with her sister with the hashtag #JusticeForBre to call attention to the case. “I’m just getting awareness for my sister, for people to know who she is, what her name is,” Palmer, 20, said to the Washington Post.

Palmer said she hopes to get the message out that black women as well as men are victims of gun violence at the hands of police or self-appointed vigilantes.

“It is literally just as equal. There’s no difference.”

More national attention came this week when the family hired prominent civil rights attorney Benjamin Crump, who is also representing the family of Ahmaud Arbery, who was killed in February by one of two white men who stopped him on the street, suspecting him of a neighborhood burglary.

“We stand with the family of this young woman in demanding answers from the Louisville Police Department,” Crump said in a statement. “Despite the tragic circumstances surrounding her death, the department has not provided any answers regarding the facts and circumstances of how this tragedy occurred, nor have they taken responsibility for her senseless killing.”

Crump also believes the fact that Taylor is a woman is another reason why the case hasn’t received much attention.

“They’re killing our sisters just like they’re killing our brothers, but for whatever reason, we have not given our sisters the same attention that we have given to Trayvon Martin, Michael Brown, Stephon Clark, Terence Crutcher, Alton Sterling, Philando Castile, Eric Garner, Laquan McDonald,” Crump said. “Breonna’s name should be known by everybody in America who said those other names, because she was in her own home, doing absolutely nothing wrong.”

Last fall another black woman, Atatiana Jefferson, was fatally shot in Fort Worth, Texas, by a police officer answering a non-emergency call about a door left open. Jefferson was babysitting her nephew at the time. The incident drew nationwide scrutiny and renewed demands for police accountability. In a rare outcome, the officer, Aaron Dean, was indicted for murder and is awaiting trial.

Politicians and journalists, including Alexandra Ocasio-Cortez and Jemele Hill, have also taken up Taylor’s cause on social media, calling for answers.

“Breonna Taylor’s family deserves justice,” Ocasio-Cortez tweeted Tuesday. “It is so dehumanizing that Breonna’s family & many others must launch public campaigns just to have victim’s lives recognized & given the dignity of due process.”

“Have any of the police been arrested or charged?” Hill tweeted. “I think you already know.”

Crump says his information contradicts the claim by police that they knocked before breaking down the door to Taylor’s home. “There are witnesses who are her neighbors. … Nobody heard the police announcing themselves,” Crump said Tuesday. “This was a botched execution of a search warrant where they already had the person they were searching for in custody.”

Family members, activists and supporters are demanding answers. Louisville Mayor Greg Fischer on Tuesday posted on his Facebook page that he has asked LMPD Chief Conrad for an investigation into the case.

Taylor’s aunt, Bianca Austin, said her niece had dreams of becoming a nurse and buying a home with Walker. Taylor was on the frontlines as an essential worker fighting COVID-19 before her death. “She had a lot of plans,” Austin said. She said it was tragic that her niece “died like that in the comfort of her own home by people who she works alongside with every day.”