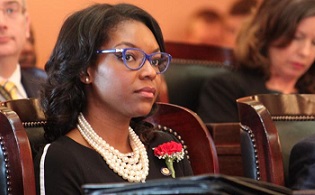 The minority leader of the Ohio house, Akron Democrat Emilia Sykes, says the state has not done enough to address the disproportionate affect COVID-19 is having on black Ohioans.

Sykes talked about the state’s response and the need she sees.

Sykes says concerns arose early about the impact of COVID-19 on minority communities. “As we started ringing the bell and talking to the governor about what are the health disparities? You have to start collecting this information, you have to understand it, so we can start targeting resources,” she said.

“That is a huge red flag that there is something that needs to be addressed,” Sykes said. But she said state leaders have been slow to understand the issue and take it seriously.

“What we’re seeing is testing happening not well in Ohio generally, but even worse in black communities, where we’re seeing the need is most,” she said. Without knowing who is infected, she says stopping the spread is nearly impossible. And then it perpetuates these health disparities. Health disparities are very predictable and they are preventable, but unfortunately if you don’t act quickly enough you can’t prevent them,” she said.

Sykes says when Gov. Mike DeWine announced the establishment of a Minority Strike Force to address these concerns there was a sense of excitement about the effort. People wanted to work to see parity among black populations and white populations. “But as the group has gone on, we’ve seen stagnation and, unfortunately, not enough being done to address these issues,” Sykes said.

“Now it is a question of whether people actually do care about every single life, or are there certain lives that are more important?” she asked.

Sykes says the concerns are heightened as the state reopens with no plan to address the disparity. “That’s something else I’ve heard from my constituents. Many who are on the front lines. These essential workers tend to be from black communities, and now we are opening without a plan for them, and it hurts,” she said. “It is emotional, and it feels like we’re being betrayed; that we had a plan that these lives are going to be protected, and now they’re not.”

At his news briefing last Thursday, Gov. Mike DeWine was asked about the progress of the minority group. He indicated he would address that early this week.

Sykes says the state needs to require–not just recommend–that data be reported, to eliminate gaps. “When you have that data, you can start to prioritize testing and resources to those communities. And then, when we know who the members of those communities are or where they are, we can stop the spread and that impact.”

“We rallied around staying at home to protect our grandparents, our older aunts and uncles, our older neighbors and friends,” Sykes noted. “It was okay because we knew they were going to be more vulnerable to this.” She says we now know black Ohioans are vulnerable as well, but “the ability and the willingness to proactively act and target resources has shrunk.”

“It takes a level of leadership to say, ‘We’re going to do this, it is the right thing to do, it is the empirically scientific, responsible thing to do. And it will save taxpayers’ dollars.'”