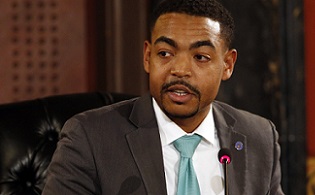 Hours ahead of the city’s second night of curfew, Columbus Police have deployed tear gas on protesters and are blocking off streets downtown.

The city of Columbus announced Sunday afternoon that the 10 p.m. curfew would remain in place until 6 a.m. Monday.

After a day of nonviolent protests over the killing of George Floyd in Minneapolis, demonstrators converged near Broad and High Streets for the fourth night in a row.

Law enforcement were mostly absent from the early protests, which remained relatively peaceful even as hundreds of people—wearing makeshift masks and carrying signs—crowded in the streets. Many in the crowd seemed intent on keeping the environment calm, although some demonstrators clashed with drivers in cars, including one who appeared to try and drive into a group of people.

Just before 8 p.m., hours before the curfew was set to begin, Columbus Police arrived and warned crowds to disperse immediately.

In response, a few people threw water bottles at the officers, who fired wooden projectiles back into the crowds. Authorities then deployed tear gas at the intersection, causing protesters to scatter for cover. Some carried gallons of milk to pour over the eyes of people hit by the gas.

In front of the Statehouse, a few Ohio State Highway Patrol troopers, who were mobilized Saturday by Gov. Mike DeWine to help with law enforcement in Franklin County, donned gas masks.

Curfews have also been set in Cincinnati, Dayton, Cleveland and other cities.

Columbus Police have come under heavy criticism for their actions during recent demonstrations. On Saturday afternoon, officers at the Statehouse used tear gas and pepper spray on crowds that included U.S. Rep. Joyce Beatty (D-Ohio) and Columbus City Council Shannon Hardin, both of whom are African American.

“Some of what we saw yesterday from Columbus Police was aggressive,” Mayor Andrew Ginther said in a tweet that has since been deleted. “We are proactively addressing these incidents. The goal is to find a better balance between public safety and peaceful protest. We will also work more swiftly to bring about change and reform.”

In a statement Saturday, Fraternal Order of Police president Keith Farrell criticized what he called the “negative characterization” of Columbus Police by Ginther.

“Officers feel as if their hands are being tied by the Mayor and his administration,” Farrell wrote. “There is no reason rioters should be permitted to destroy and loot business.”

“With urgency we must form a Civilian Review Commission, greatly expand deescalation training including use of non-aggressive tactics during nonviolent protest, adopt tighter restrictions on officer use of force, and implement the recommendations of the Safety Advisory Commission,” Brown wrote.

Hardin called for similar changes, including independent investigations into police use of force, which community activists have demanded for years. He also urged the implementation of recommendations from a 2019 report on racial disparities in Columbus Police procedures.

This article will be updated with more information as the story develops.