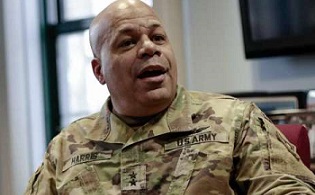 The FBI is investigating a member of the Ohio National Guard after federal officials revealed information they say indicates the guard member allegedly expressed white supremacist ideology online before being deployed to assist with protest security in Washington, D.C., according to Gov. Mike DeWine.

In his regular coronavirus briefing Friday, DeWine told reporters the Guardsman is suspended from all missions as the FBIs investigation continues.

The state recently deployed 100 members of the guard to the nation’s capital to help quell protests over the police killing of George Floyd, a 46-year-old black man, in Minneapolis on May 25.

The unidentified Guardsman would be permanently removed from duty if the federal investigation confirms the allegations, DeWine said.

DeWine reminded Ohioans the Guard is made up of citizen soldiers.

“While I fully support everyone’s right to free speech, guardsmen and guardswomen are sworn to protect all of us, regardless of race, ethnic background or religion. Our Ohio National Guard members are in a position of trust and authority during times of crisis. And anyone who displays a malice towards specific groups of Americans has no place in the Ohio National Guard,” he said.

Maj. Gen. John C. Harris, the Ohio National Guard adjutant general, appeared as part of the press conference to discuss the coronavirus but did not offer any comments related to the guard member’s suspension or the investigation.

DeWine has directed top military officials to set up a new procedure aimed at preventing similar incidents in the future.

The governor also said the state is establishing an agency to address the health-related and other inequities between white and other Ohioans, also known in public health circles as social determinants of health.

State officials announced Friday that still-shuttered casinos, racinos, amusement parks, water parks and outdoor theaters would be allowed reopen June 19. Reopenings are contingent on businesses providing strict plans to protect the public from the spread of COVID-19, such as limiting the number of people permitted inside a venue, one-way traffic signage and enforced coronavirus sanitation measures.

Plans are also in the works for reopening the Memorial Golf Tournament scheduled for July, DeWine said.