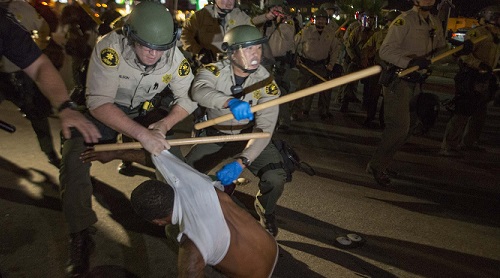 The Supreme Court refused Monday to reconsider the legal immunity from lawsuits generally given to police and other public officials accused of misconduct.

The justices’ decision not to hear a case on qualified immunity in their next term, which begins in October, follows the death last month of George Floyd, an African American man, in Minneapolis while in police custody. His killing led to days of unrest as well as peaceful protests  across the U.S. and a renewed national debate about racism and police brutality.

The Supreme Court has in recent decades set a high bar for pursuing lawsuits over official misconduct. Officers’ behavior must violate “clearly established” laws or constitutional rights, and courts have found it seldom does because almost every specific allegation is different.

But some justices, lower court judges and scholars on both the left and right have questioned that legal doctrine for creating a nearly impossible standard for victims to meet and a nearly blanket immunity for those accused of misconduct.

Associate Justice Clarence Thomas dissented from the decision not to hear a new case on qualified immunity, one involving a burglar who surrendered and then was bitten by a police dog.

By refusing to hear a case, the court is not necessarily signaling that it will never abolish qualified immunity or significantly scale it back. Chief Justice John Roberts, in particular, prefers baby steps to big changes in court precedent.

The justices had considered more than a dozen petitions involving public officials’ invocation of qualified immunity even before examples of police brutality in Minneapolis and Louisville, Kentucky, captured the nation’s attention.

In the case that drew Thomas’ dissent, a Tennessee man was bitten by a police dog unleashed on him while he was sitting with his hands in the air. In another, a 10-year-old Georgia boy was shot in his backyard by police pursuing an unarmed criminal suspect. In a third, police in California searching for a gang member used tear gas grenades rather than the house key given to them by his ex-girlfriend.

David Cole, national legal director at the American Civil Liberties Union, highlighted the implications of the court’s decision on police accountability and Congress’ responsibility to abolish the doctrine:

“We have seen the deadly consequences play out on the streets, and Black Americans have largely paid the price,” Cole said. “Recent events demonstrate the urgent need for Congress to stand up for the rule of law and abolish qualified immunity – for anyone acting under color of law – to close the loophole allowing government officials to escape accountability for violating constitutional rights.”

The Supreme Court has given police and other public officials considerable leeway in most cases where their conduct has come into question.

• In February, the court’s conservatives ruled that the family of a Mexican teenager shot and killed by a U.S. Border Patrol agent cannot seek damages because of the border that was between them.

• In 2017, the court ruled that Bush administration officials could not be held liable for the detention and harsh treatment of illegal immigrants in the calamitous days after the 9/11 terrorist attacks.

• In 2015, the justices ruled that California police were entitled to protection after they forcibly entered the room of a woman with a mental disability and shot her.

Two of the court’s current justices have pushed back against that trend from opposite ends of the ideological spectrum.

Thomas, the court’s most conservative member, has complained that the doctrine has no historical basis. The court, he said in a 2017 case, routinely substitutes “our own policy preferences for the mandates of Congress.”

Associate Justice Sonia Sotomayor, arguably its most liberal member, said in 2015 that the court’s “one-sided approach to qualified immunity transforms the doctrine into an absolute shield for law enforcement officers.”