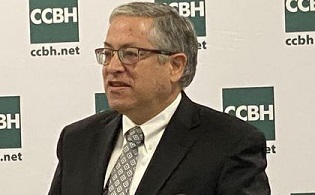 Gov. Mike DeWine announced the Ohio Department of Health will issue a public health order requiring face masks in public in seven counties where the spread of COVID-19 is considered most severe.

“The law is a teacher and the law helps establish the norms in society, and that’s what we hope happens in these seven counties,” DeWine said Tuesday.

“We don’t want to close back down,” Budish said. “The economy’s already been seriously damaged, and another closure would probably be devastating. The simplest, least intrusive step that we can take is to mandate the wearing of face coverings when in public.”

Council President Dan Brady opted to review the full text of DeWine’s order before making a decision on local legislation. If council does move ahead, the county mask proposal will be discussed at a July 16 committee meeting.

Even as coronavirus cases increase dramatically, Ohio resisted imposing a statewide mask requirement. At least a dozen states, including neighborhing Pennsylvania, have implemented such measures.

Meanwhile, face mask mandates have taken off on the city level, with Cleveland, Dayton, Cincinnati and Columbus all moving to require coverings in public spaces. Some even added penalties for violating the rule.

“The earlier that we do things, the more impact that we have,” DeWine said. “And so there’s a real opportunity in these other counties to avoid getting to the red level, and with all the things that go with that and the danger that go with it.”

Tuesday’s orders apply to any indoor location other than a residence, as well as people who are outdoors and unable to consistently maintain six-foot social distancing, and while waiting for and riding public transportation. There are exceptions granted for children under 10 years old, and those with physical or developmental disabilities.

Enforcing the mask mandates will fall to state and local officials, not individual establishments.

Like other coronavirus restrictions, violating the order is considered a misdemeanor, although DeWine says the state isn’t looking to arrest people. However, he issued a warning to Ohio legislators who are considering a bill to remove the Health Department’s ability to enforce public health orders.

“It would be a tragic mistake, and I’m not gonna let it happen, for us to give up the opportunity to try to keep Ohioans safe,” DeWine said. “We are in a crisis. It is a very serious crisis. It is a crisis we have not seen in this state for 102 years.”

DeWine also defended his legal authority to require people to wear masks, while emphasizing the limited nature of this order.

Beginning in June, after the stay-at-home order lapsed and businesses reopened, Ohio started to see cases mount again. On Tuesday, the Department of Health reported an additional 948 cases and 43 deaths in the last day, bringing the state’s totals to 58,904 cases and 2,970 deaths.

Ohio’s color code system, which the governor rolled out last week, evaluates the risk of each county based on indicators like new cases per capita and the rate of hospital admissions. DeWine says the rankings will be updated Wednesday, and at least one county – Franklin – is at risk of graduating to a level four.

“This is what is needed for Ohioans to stay safe, and if we are not able to successfully do this and carry this out, we’re going to see this virus take command again,” DeWine said.

Although more young people are contracting COVID-19, DeWine emphasized that the biggest health impacts and mortality will be passed on to those who are highest-risk, no matter who contracts the disease first. DeWine says health commissioners report the disease is spreading widely from family gatherings, parties, funerals and birthday parties, as well as at tourist destinations and churches.

On Monday, state Rep. Stephanie Howse, the president of the Ohio Legislative Black Caucus, announced that she tested positive for COVID-19 but has so far exhibited mild symptoms.