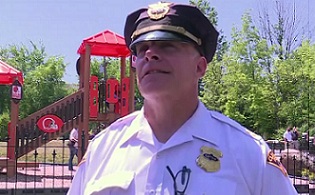 On his last official day on the job July 6, Cleveland Police Capt. Keith Sulzer spent the morning at a supermarket, buying ice cream to hand out to neighborhood kids.

“I got Eskimo Pies, I got some crunch bars,” he said, perusing his cart as the cash register chimed.

Sulzer joined the Cleveland Division of Police in 1990, later becoming commander of the second district.

Most recently, he tried to build up the city’s community policing program. That’s where police get to know people and connect them with social services to address their problems, rather than simply making arrests.

“We’re definitely much better off than we were in the past, but we’re not where we were 25 years ago,” he said. “We had 100 officers in community policing [then].”

Cleveland now has 15 officers devoted full-time to community engagement, part of reforms instituted as part of a federal consent decree. Sulzer said that’s not nearly enough for a force of 1,600 officers, especially given pressure for police to improve relations with communities of color.

“If the community wants police to change, we have to change,” he said. “That’s what this country’s built on. So we’re going to have to change so that we can make people safe, but at the same time, police the way they want us to police.”

Relationship building, he said, has been the predominant theme he’s heard in calls for reform.

“The biggest change people are looking for is social,” he said. “You know, where rather than arrest, we solve the problem that we’re encountering and refer [people] to a social service agency that can truly make a change.”

Sulzer said he agrees with the sentiment behind the Black Lives Matter movement, but not with calls to defund police. He said police will remain essential as long as guns remain prominent and glorified in Cleveland’s neighborhoods.

The rash of shootings in the city over the July 4 weekend only demonstrated the need for better leadership on curbing gun violence, he said.

“We have a whole culture of guns and violence and that needs to be addressed,” Sulzer said. “So Black lives absolutely do matter, but we need to delve into why violence and why guns are so attractive to our community.”

Sulzer said he would remain in Cleveland and serve on the board of the Cleveland Police Foundation following his retirement.