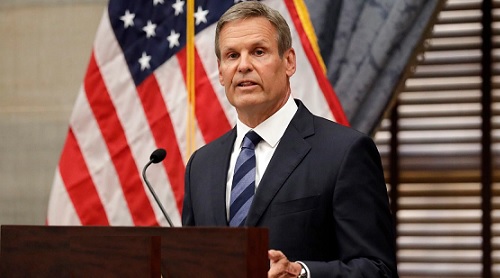 Republican lawmakers and a Republican governor have green-lit a new law in Tennessee that makes it possible for people to have their voting rights revoked as punishment for participating in protests.

Under the new law, demonstrators who camp on state property—as scores have been doing in front of the state’s Capitol building since George Floyd’s killing earlier this year—can now be charged with a Class D felony, up from the misdemeanor it was previously.

Tennessee is one of 21 states that punishes felons by taking away their right to vote, and Gov. Lee made it clear that this threat is meant as a warning to the protestors who have been forcing elected officials there to pay attention to their concerns about racial injustice in the state.

The bill also imposes a mandatory minimum 45-day hold if convicted of aggravated rioting; enhances the fine for obstructing emergency vehicles from accessing highways; requires a court to order restitution for damaging state property; and creates a Class C felony offense for aggravated assault against a first responder — which carries a $15,000 fine and mandatory minimum 90-day prison sentence.

The governor said a provision requiring a warning to those camping illegally strengthened the bill, and cited the discretion of prosecutors and judges.

Lee has declined to meet with the activists who have been protesting in front of the state’s Capitol building and seeking an audience with him for months, and pointed to fires that were set at a Tennessee courthouse when the protests first kicked off this spring as justification for the draconian measure.

“We saw lawlessness that needed to be addressed immediately. And that was done so,” Lee said of signing the new bill into law according to AP, which added in its report that protests in the state have been overwhelmingly peaceful since May.

The irony of quelling a constitutional right by holding the right to vote hostage and threatening entry into the racist carceral system is not lost on me, nor is it lost on ACLU Tennessee (which had asked the Governor to veto the bill).

“We are very disappointed in Governor Lee’s decision to sign this bill, which chills free speech, undermines criminal justice reform and fails to address the very issues of racial justice and police violence raised by the protesters who are being targeted,” said Executive Director Hedy Weinberg in a statement on the new law.