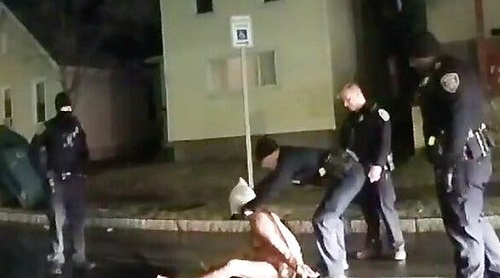 In a scene that’s become all too familiar this year, a car rammed through a group of Black Lives Matter protesters in New York’s Times Square on Thursday night, hitting several pedestrians and cyclists.

That news would have been grim enough, but as reporters and internet sleuths looked into the attack, which was widely shared on social media, they found a connection between the car and NYPD officers who were at Times Square that night.

Hundreds of people had gathered in the rain to protest the brutal death of Daniel Prude, a Rochester man who died from asphyxiation after police officers covered his head with a “spit sock” and pinned him to the ground until he became unconscious.

Prude died on March 30 after being taken off life support. His death received no public attention until early September, when his family released the body-camera video they had obtained. Police were responding to a call made by Prude’s brother, who was concerned about his safety.

The attack on the protesters happened early in their march. Video of the assault shows a group of protesters chanting “No Justice, No Peace” approaching an intersection clogged with other demonstrators when a black Ford sedan lurches into the crowd. The driver honked several times at protesters before ramming through the BLM demonstrators, some of whom chased after the car after they leapt out of the way.

But Black Lives Matter protesters weren’t the only ones in Times Square that evening. Anti-BLM protesters wearing MAGA gear showed up to counter-protest. At one point, NYPD officers encircled the handful of counter-protesters, forming a human wall between them and the BLM demonstrators.

Shortly after the attack, rumors began circulating that the police may have been involved.

New York-based journalist Noah Hurowitz shared a video that appeared to show NYPD officers escorting at least two pro-Trump counter-protesters into a black Ford Taurus. Not long after the car takes off, the crowd can be heard yelling.

One Twitter user noted the timeline seemed to line up with the sedan being the same vehicle police escorted counterprotesters into. The NYPD, via its official NYPD Times Square Twitter account, denied that its car was the one who plowed through the crowd on Thursday night, and said there was an active investigation into the incident.

But WNYC’S Gwynne Hogan, who was at the protest, and Gothamist reporter Jake Offenhartz found the license plate of the car that plowed through the protesters and discovered it matched the vehicle of a prominent pro-NYPD supporter, Hakim Gibson.

The vehicle’s license plate matches that of another car frequently shared on social media by Hakim Gibson, a pro-NYPD activist who currently runs a “law enforcement support page.” The Ford Taurus appears to be a former police car purchased from a police auction. According to Facebook posts, Gibson recently outfitted the car with a push bar and spotlight, joking online that other drivers had often mistaken him for a police officer.

The Gothamist also reports that later on in the march, the driver of another vehicle waved what appeared to be a handgun at protesters at Columbus Circle, “causing further chaos” and provoking protesters to duck for cover at a nearby subway station.

“This person was pointing it at protesters after coming to a stop, and then drove away,” a 30-year-old street medic told the local news site.

There appeared to be no serious injuries as a result of the car ramming through the crowd. And though protesters were rattled, they continued with the demonstration.

As of 11 a.m. on September 4, Friday morning, the NYPD has not provided any further details into the investigation nor the identity of the people in the vehicle.

Correction: Sept. 5, 2020, 6:36 p.m. ET: A previous version of this article stated that the driver of the car that rammed through the crowd at Times Square waved a handgun at protesters. That was the driver of a different vehicle, who intimidated protesters at the end of the march.