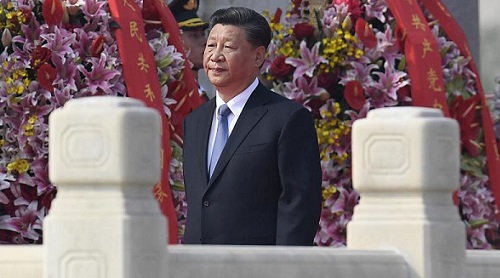 China, where the novel coronavirus was first discovered, is now by most measures in the clear, with much of life returning to normal.

It is a startling reversal from January and February, where China appeared to be in chaos as the rest of the world looked on.

China’s recovery was particularly evident over Golden Week, one of China’s largest holidays, which ran from October 1 to October 7.

Some 637 million people — or 46% of the entire country’s population — traveled around China that week, spending between them $69 billion on holidays, shopping trips, weddings, and visits to relatives, state media said.

Meanwhile, the US and a number of European nations are struggling to quash their outbreaks and reignite their economies following widespread job losses and recessions.

The US Thanksgiving holiday weekend is a little more than a month away. On Wednesday, the top US infectious-disease expert, Anthony Fauci, said Americans must “sacrifice” it if they hope to prevent another surge of cases.

Countries are also now facing the added pressure of winter, which with its cold weather and people’s weakened immune systems could fuel new surges of COVID-19 cases.

China was the first to experience the outbreak, so it follows that it should be first to pass out of it. But the speed with which it has done so lays bare the poor handling of the pandemic by many Western nations.

The US, with a population of 328 million, has recorded nearly 8 million coronavirus cases and more than 217,000 deaths as of Friday, according to a tracker from Johns Hopkins University.

Meanwhile, China, with a population of 1.3 billion, has recorded of 90,900 coronavirus cases and 4,739 deaths as of Friday, per Johns Hopkins.

China’s success has been attributed to a number of factors.

The first thing that enabled China to succeed was a commitment to testing, and testing smartly.

Getting a test was fast, and it was free. Those who tested positive were immediately sent to newly-created isolation centers or nearby hospitals, reducing the risk of infecting people they live or work with.

Wuhan was quickly isolated, with residents spending 76 days in lockdown.

“These are places that got out of control in the beginning, and China made this decision to protect China and the rest of the world,” Bruce Aylward, assistant director-general at the WHO, told Vox at the time, adding that China’s success came from speed and from taking contract tracing seriously.

“The faster you can find the cases, isolate the cases, and track their close contacts, the more successful you’re going to be,” he said.

“They have their system primed for rapid detection and rapid response. They never want to be in another situation like a Wuhan — and they haven’t.”

Coupled with this, as Business Insider previously reported, hospitals were built from scratch within days, non-urgent medical care was delayed, doctor visits were moved online, outdoor fever clinics were opened, hospitals walled off COVID-19 wards, and large-scale contact tracing was rolled out.

Fourteen thousand health and temperature checkpoints were also set up at most major transport hubs across the country, according to The Lancet medical journal.

In July, as China began to tentatively reopen its borders, the country’s aviation authority said that anyone entering from abroad must have tested negative for COVID-19 within five days of boarding.

And in the latter days of the outbreak, when barely any new cases were being recorded, China still took no risks.

On October 9, the eastern city of Qingdao announced it would test all 9 million residents for the coronavirus in a five-day blitz after identifying 12 new cases linked to a local hospital.

On Thursday, the state-run People’s Daily newspaper reported that authorities had conducted 10.5 million tests. That is equivalent to testing everyone in the New York City area.

It was not the first time China tested a whole city at the first sign of a threat that the coronavirus was on the spread again.

In May, Wuhan tested its 11 million residents over a 10-day period. Those that did not submit themselves for testing were told that they would have to pay for all their tests in the future, according to The New York Times.

Before that flare-up, COVID-19 test sites in Wuhan were processing an average 46,000 tests a day, The Times reported. On the first day of the mass testing effort in May, it processed 1.47 million tests, The Times said.

It indicated just how seriously China was still taking the virus, even after weeks with no new locally transmitted cases. Some experts even said that it was overkill.

Jin Dongyan, a virologist at the University of Hong Kong, told The Times that a sample of about 100,000 people would have been enough, and described the mass testing scheme as “kind of scary.”

To compare the level of testing in Wuhan to that in the US, The Times reported that New York state had tested a total of 1.7 million people between March 4 and June 3.

During that period, on April 7, the state logged a record 5,489 coronavirus deaths. The previous day, 4,758 people died.

Some US cities have drawn praise for rolling out fairly successful testing drives, like Los Angeles and San Francisco, but all have fallen short of the efforts seen in China.

Meanwhile, the UK has a chronic testing problem, with the government on several occasions failing to hit daily testing targets, most recently in the face of heightened demand.

Spain, too, struggled to ramp up testing in the spring. France ramped up testing this autumn, but there have been multiple reports of widespread delays and overloaded laboratories.

Throughout the pandemic cities across China enforced lockdowns strictly, and reintroduced them when needed.

Residents complied with public-health measures, with local authorities visiting households to make sure people were at home and even barred them from leaving.

China is an authoritarian state which routinely monitors its citizens and suppresses dissent. During its outbreak officials across the country used hi-tech methods to monitor their residents, from catching people with fevers with facial-recognition and thermal cameras, to flying drones to shame people for being outdoors.

A study comparing human interactions in the major cities of Wuhan and Shanghai before and after the pandemic, published in Science magazine in June, found that “daily contacts were reduced seven-to-eightfold during the COVID-19 social distancing period, with most interactions restricted to the household.”

“We find that social distancing alone, as implemented in China during the outbreak, is sufficient to control COVID-19,” the authors wrote.

Another reason why China enforced public-health measures so well, one expert said, was because it already had experience responding to outbreaks, thanks to the SARS epidemic in 2003.

“It has a centralized epidemic response system. Most Chinese adults remember SARS-CoV and the high mortality rate that was associated with it,” Xi Chen, an associate professor at the Yale School of Public Health, told The Lancet in October.

“The society was very alert as to what can happen in a coronavirus outbreak. Other countries do not have such fresh memories of a pandemic.”

Meanwhile, the US failed to introduce a coherent federal plan to make social distancing or wearing masks a norm.

The White House flip-flopped between endorsing the Centers for Disease Control and Prevention’s advice on wearing masks and ignoring it. Last month the White House reportedly blocked the CDC from imposing rules to make masks compulsory on public transport.

Dr. Leana Wen, the former health commissioner for Baltimore, told CNN in May: “We know social distancing is most effective when applied early, consistently and aggressively. That’s not what has happened across the US.”

Masks are widely believed to be one key way to slow the spread of the virus, and China, being the world’s largest producer of personal protective equipment, was well placed to quickly increase production and supply frontline workers with protection.

Authorities in the US, UK, and Europe, however, reported shortages of PPE, and took months to admit that mask wearing was beneficial to curbing the spread of the coronavirus. In May, the British government was still considering whether to tell the public to cover their faces in public.

On the contrary, “compliance was very high” in China, said Chen, the Yale professor.

He told The Lancet: “Compare that with the USA, where even in June and July, when the virus was surging, people were still refusing to wear masks. Even in late September, President Trump still treated Joe Biden’s mask-wearing as a weakness to be ridiculed.”

In the US, UK, and Italy, officials also blamed surges in cases on young people who they said were eschewing masks.

The scale and intent of China’s lockdown were hard to replicate in the US and Europe.

When China locked down Wuhan and nearby cities in January, some Western experts suggested the move was unethical. Throughout the pandemic citizens in London, Madrid, Belgrade, Denver, Austin, and more have held anti-lockdown protests.

There is also a consensus among medical professionals that lockdowns in the US and Europe ended well before the communities were free from the virus or equipped to suppress flare-ups.

When San Francisco locked down in March — becoming one of the first urban areas in the US to do so — residents largely followed the government’s orders on mask wearing, social distancing, limiting gatherings.

Two months later, the city recorded just 35 coronavirus deaths — compared to 14,700 in New York City in the same time frame, according to Wired. (San Francisco has a tenth of New York City’s population, so its comparable death toll would have been 1,470, Wired said.)

But as the patience of San Franciscans waned in August, cases began to climb.

“What it [the lockdown] bought us was 3 1/2 months of relative calm, relatively few cases, astoundingly few deaths, and an opportunity to build up capacity,” Dr. Robert Wachter, chair of the University of California, San Francisco, department of medicine, told The Washington Post on August 3.

“What it also bought us was a little bit of complacency.”

In Europe the case was much the same, with experts saying that the continent was suffering from “pandemic fatigue.”

Cases are on the rise this week, and reaching record levels. The UK reached a new peak of more than 17,000 daily cases on Thursday. On Tuesday, France reported a record 19,000 new cases.

Belgium and Poland have also set new records for daily cases, with infections also surging in Germany, Ireland, Italy, and Sweden. Paris, London, and other large areas were put under renewed restrictions this week.

While high case numbers can be in part attributed to increased testing — which was missing during the peak of the continent’s outbreak this spring — there has also been increased socializing in those places, Business Insider’s Aria Bendix reported.

Nevertheless, experts have warned that, in places like the UK, lockdowns were lifted too early.

In an attempt to make up lost ground, Prime Minister Boris Johnson imposed lockdowns on a number of northern urban areas in late September and early October, with little effect.

It was revealed on October 13 that Johnson’s government ignored advice from the government’s public-health experts to enforce a two-week lockdown in late September. Those measures would have helped stop the virus resurging.

On September 8, Chinese President Xi Jinping declared the coronavirus defeated in his country.

“We are leading the world in economic recovery and in the fight against COVID-19,” he told a ceremony honoring healthcare workers.

It also appears that the swift, sometimes hard measures adopted in China saw it become the first major economy to return to pre-pandemic levels this summer.

China said its economy grew 3.2% in the second quarter of 2020, with ex-Goldman Sachs economist Jim O’Neill saying that the country is likely to erase all its 2020 economic losses next year.

Meanwhile, the US and many European states still have a lot to do to drive down its coronavirus outbreak to China’s level.

And as winter approaches, experts fear that deaths will rocket if nothing changes.

The Institute for Health Metrics and Evaluation forecasted on Friday that if no change in policy comes, the US could expect a total of 389,000 COVID-19 deaths by February 1, 2021 — almost double the current death toll.