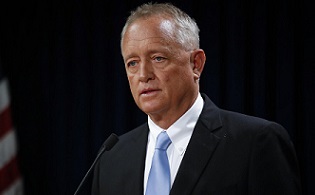 Ohio Attorney General Dave Yost wants to preserve the use of no-knock warrants in Ohio, but make the warrants harder to acquire.

Ohio Attorney General Dave Yost wants to preserve the use of “no-knock” warrants in Ohio.

To compromise with state officials, Yost said he is willing to make no-knock warrants harder to acquire.

This week, Yost and a host of Ohio county prosecutors sent a letter to state officials seeking to preserve the use of “no-knock” warrants, but to make such warrants usable only in extraordinary circumstances.

“When a warrant is sometimes necessary, officers should be properly equipped to make the safest entry possible, and a no-knock warrant – a waiver of the statutory “knock and announce” requirements – is the right tool to safeguard them,” Yost said.

The prosecutors and Yost argued the standard for issuing a no-knock warrant should now include:

“While these types of warrants are only used in the rarest of circumstances, it is important they are done so in a responsible manner that takes the safety of all parties involved into consideration,” Cuyahoga County Prosecutor Michael O’Malley said.

“I wholeheartedly support the AG’s recommendations to the state legislature to ensure that no-knock warrants are used only in the most exceptional circumstances and that we do everything we can to make sure that both innocent civilians and law enforcement are protected,” he said.