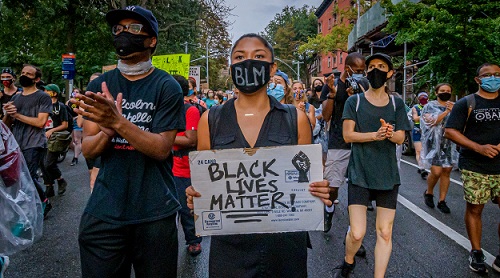 “Black folks, you know, haven’t even had the right and the privilege throughout our time on this continent to be recognized even as human beings.” —Rukia Lumumba, founding director of the People’s Advocacy Institute and co-director of the Electoral Justice Project of the Movement for Black Lives

That was the year the United States officially recognized Black folks “born or naturalized in the United States” as full citizens, at least according to the 14th Amendment. Prior to that point, enslaved Black Americans were only considered three-fifths of a person—not citizens but property. You know, because of slavery.

And even despite that constitutional change, America’s legacy of subjugating Black people continues to this day through inadequate healthcare services (as made increasingly evident during the COVID-19 pandemic), unsafe living conditions, disparities in education, and more. This is all in spite of some social gains achieved through the civil rights movement.

That’s why Rukia Lumumba is so adamant about moving past a civil rights framework and into one that prioritizes human rights like shelter, economic stability, and good quality of life.

Though on its surface, the terms may appear interchangeable to some, the founding director of the People’s Advocacy Institute and co-director of the Electoral Justice Project of the Movement for Black Lives explained that there is much more that differentiates the two worldviews besides semantics.

“Traditionally, civil rights here have been the rights that allow you access,” Lumumba said. “Human rights are the right for you to be even recognized as a human being, which we haven’t seen in the United States for that long.”

Lumumba asserts that this call for human rights includes all people, including those indigenous to the United States.

“The way that this country has treated the indigenous people of this land has been horrific. So when I’m talking about human rights for Black people, we know that if Black people have human rights, that will impact every single population in the United States,” she said.

Rampant voter disenfranchisement among Black Americans and rates of disproportionate incarceration—which often strips individuals of voting rights— are evidence of blatant inequalities in potential life outcomes. Yet there are still many people who don’t view the Movement for Black Lives as a human rights issue.

“The fact that someone can literally be killed, can be smothered to death, shot to death, knee on the neck by a police officer, even though they saw it on TV, is still unreal to them,” said Lumumba. “I think for other folks it’s easier to ignore, or to say that it doesn’t exist because it allows them to continue living their life in the way that they feel has been beneficial to them.”

Lumumba breaks down what her hopes are for our future given our past and present, and goes into more detail about how to move beyond a civil rights paradigm in the video above.