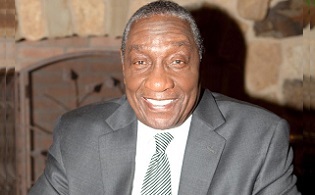 The Real Deal, By By Ryan Puente, Posted February 4th 2021

Last year the National Football League draft went down in history as the first and perhaps the only one to be conducted in a total quarantine. As dramatic and overhyped as that turned out to be, a less pronounced aspect of this year’s draft may prove to be far more consequential in the long run: a majority of the 32 players taken in the first round of the NFL draft — seventeen of them — were represented by African American agents.

That was a first in league history. And while most of those agents, many of whom are less than 40 years old, recognize the late Eugene Parker as the first black “super-agent.” — his client roster included Deion Sanders, Emmitt Smith, Larry Fitzgerald, among many others — they may not appreciate the trailblazing role played by Cleveland’s Arnold R. Pinkney as far back as the mid-sixties.

While Parker’s success may have “set the tone for all black agents”, Pinkney was not only a forerunner in pioneering sports representation by black Americans; he helped pave the way for the future hiring of African American coaches and front-office personnel.

Born in Youngstown, Ohio, in the shadows of the steel mills, Pinkney became a kingmaker in Cleveland and one of the nation’s most effective political strategists and influencers. He managed and worked campaigns for notable figures like Mayor Carl Stokes, Congressman Louis Stokes, Vice President Hubert Humphrey, Ohio Gov. Richard Celeste, the Rev. Jesse Jackson and countless others.

Before making his mark in politics, Pinkney was a successful and well-known businessman. He co-founded Pinkney-Perry Insurance, earning the title of “Million Dollar Man” for regularly raking in more than a million dollars of premiums each year. Pinkney’s business smarts and negotiation skills enabled him to serve as a key financial advisor and representative to many of the NFL’s early black players. Pinkney was effective and successful in securing notable contracts for several star Cleveland Browns, including Leroy Kelly, John Wooten and Walter Johnson and running  back Eugene “Mercury” Morris of the Miami Dolphins.

Pinkney’s sports representation was not limited just to football or the Browns. He also led the negotiation team which included ex-Browns linebacker Sam Tidmore, that secured a healthy contract for Larry Doby Johnson from the Cleveland Indians after numerous meetings and several phone calls. Johnson at the time was a hot catcher prospect enrolled at Cleveland’s East Tech High School.

It was the battle to earn fair pay for  star running back Leroy Kelly that launched Pinkney into the world of high-stakes sports agency.

Drafted by the Cleveland Browns in the eighth-round in 1964, running back Leroy Kelly seldom played in his first two seasons. After Jim Brown retired before the 1966 season, Kelly stepped in and rushed for more than 1,000 yards in his next three seasons. He won NFL rushing titles in 1967 and 1968 and played in four championship games during his 10 seasons with the Browns.

Pinkney talents and energy were marking him as a rising leader in the black community but he was unknown in wider political circles. Not yet 40 years old, he first gained broad public attention by breaking the impasse between Leroy Kelly and the Cleveland Browns when it appeared the halfback might sit out the 1967 football season because of contract difficulties.

In the summer of 1967, Kelly was one of five black players “holding out” from   Browns training camp along with John Wooten, Sidney Williams, Mike Howell and John Brown.

Jim Brown held a press conference at M-G-M Studios in Hollywood where he was starring in a movie. He blasted Browns owner Art Modell over the players’ salaries. Brown mentioned that Kelly “received the unbelievable salary last year of $20,000.”

Said Brown, “This man represents the key to a championship for the Cleveland Browns. He is not even close to making the salary that average untried rookies are guaranteed.” These negotiations reached an impasse.

Pinkney had known Kelly since he was drafted and wrote a substantial insurance policy on him in 1966. By December 1967, he had gained the authority to conduct Kelly’s contract negotiations with Browns ownership.

“Modell and the Browns were fortunate, however, that Kelly selected a solid person such as Pinkney to help work out his problems. Matters between the team’s president and the National Football League’s leading rusher had reached something of an impasse. There was need for a third party.”

I recently interviewed retired All-Pro guard and civil rights activist John B. Wooten about his former brother-in-law, Pinkney, and their early days serving together in the Negro Industrial and Economic Union (NIEU), later known as the Black Economic Union.

Headquartered in Cleveland, the NIEU was a first of its kind organization. Founded in 1966 by Hall of Fame running back Jim Brown, NIEU’s mission focused on eliminating poverty in African American communities and improving economic conditions through financial literacy, education, programming and other resources. Wooten served as Vice President, Pinkney was Secretary-Treasurer and soon-to-be mayor Carl B. Stokes was Legal-Secretary.

Pinkney began advising Wooten in 1968 during his ninth season with the Browns after Wooten was released following a dispute with a teammate, cornerback Ross Fichtner. Fichtner who held an annual golf tournament, called Wooten to say that because of complaints about the behavior of several of the Browns’ black players the year before, no blacks would be invited to play in that summer’s tournament.

Wooten offered to make amends to resolve the allegations but Fichtner remained adamant: no black players would be invited to the tournament. When Browns owner Art Modell read about the incident in the newspaper — Wooten spoke to a local columnist about the issue — he waived both players.

“I was very upset because I had been chosen earlier that season as one of the best guards in the league and here I am getting waived,” Wooten said.

Wooten, wearing a dashiki, and Pinkney met with then NFL Commissioner Pete Rozelle while he was in Canton for the annual Hall of Fame game. They threatened to file a discrimination lawsuit if Wooten was not reinstated.

During that same summer of 1968, as the Browns were preparing for a season of championship expectations, Pinkney and other black community leaders publicly pressured the owner to hire more black coaches and front-office personnel.

On August 6, owner Art Modell, along with his general manager and personnel director, met with Pinkney and ten other leaders in the black community for three hours to discuss the team’s hiring practices. Pinkney and his allies demanded the Browns hire more black coaching and front-office personnel. Modell took the position that the “Browns record of equal opportunity for the Negro player is legendary.”

Later that month, in response to public protest organized by Pinkney and other black leaders, Modell and the Browns repeated their position in a statement that said, “We shall continue as we have in the past our practice of hiring people whether they be players or executives solely on their qualifications and fitness for the particular job with total disregard to the applicant’s color or national origin.”

Beach also described an instance on the team plane when Modell instructed him not to read a book about Elijah Muhammad. Beach fired back: “A man can’t tell another man what to read. I play football for you. If you don’t want me on this team, when we get home, give me a check and I’ll leave. But, don’t ever think you can tell me what to read.”

And finally, a year later at only 38-years-old, Pinkney represented his third African American athlete, Browns defensive tackle Walter Johnson. Johnson agreed to terms on July 24, 1969, after final negotiations between Pinkney and the Browns general manager. Johnson played 13 seasons, including 12 with the Browns, and became a three-time Pro Bowler.

A Man for All Seasons

It’s fascinating to consider the dynamics that had Pinkney, now a prominent political figure with his friend Carl Stokes sitting in the mayor’s chair, growing a national representation at the height of the Civil Rights movement, negotiating head to head with the all-white Browns ownership that radiated a plantation mentality.

While Eugene Parker is no doubt justly celebrated for his work as one of the earliest black sports agents, he would have only been a teenager in the mid-to-late 1960s when Pinkney was juggling balls on many fronts. And though Pinkney’s client list may not have included top first-round picks, many of the players he represented were Pro Bowlers.

Beyond just representing players, Pinkney was championing the hiring of blacks in leadership positions more than 50 years ago and helping to pave the way for those who followed. While he has not received the recognition, Pinkney was clearly a pioneer.

“That’s true,” Wooten said. “It’s true and I know Eugene and all those guys. The point of it all is that Arnold never put on that particular hat and said, ‘You know I’m going to be an agent.’ He never got credit for that yet he was involved in all of these negotiations.”

As I told him early on, ‘You know, we just need you to help. We need your help, your expertise, your knowledge.’ Above  all, he just had a calmness about him. He had that legal thing in his mind and that’s why he did such a great job for all of us. There’s me with Rozelle, but also with Kelly, Walt Johnson and those guys but he never took on the vision of agent.”