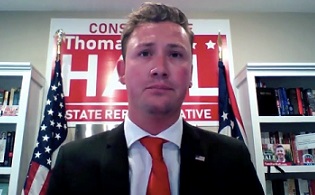 Lawmakers are considering a proposal that would allow teachers and school workers to carry guns in schools if they have the eight hours of training required to earn a concealed carry license. The bill, which gives local school districts the authority to require additional training, is sparking a debate on how to keep students safe in the classroom.

House Bill 99 would clarify a law currently being argued at the Ohio Supreme Court.

It gives school districts the power to allow teachers to be armed in schools as long as they complete the concealed carry training, which is eight hours long.

Rep. Thomas Hall (R-Middletown) said, from there, his bill gives local officials the authority to come up with a school safety plan that could include more training.

“Educators should have the ability to carry firearms in the classroom to protect students and staff. In my bill, we simply give local control to allow for the local school boards and local governing bodies to decide what amount of training is necessary to allow teachers to carry a firearm in a school safety zone,” Hall told the House Criminal Justice Committee in March.

The origin of this bill stems from a 2016 school shooting at Madison High School in Butler County that left four people injured. Hall’s father was the school resource officer that chased the shooter out of the building.

Madison Local Schools then approved a plan to arm teachers, which was met with a lawsuit filed by parents in the district. Ben Adams is one of them. He appeared before the House Criminal Justice committee to oppose Hall’s bill. Adams said eight hours of training is not enough.

“We don’t think that’s appropriate for teachers to be carrying weapons in school. That’s not what they’re licensed to do. And even if they had some kind of some kind of training, there are a lot of a lot of other issues that need to be considered,” said Melissa Cropper, president of the Ohio Federation of Teachers, a teacher’s union.

Cropper says assessing and de-escalating a dangerous situation are other vital skills that need to be considered.

Joseph Eaton, with the Buckeye Firearms Association, is a supporter of the legislation. He says teachers with concealed carry licenses can legally carry their firearm to other places and they should have that right extended into the schools.

“When they’re out in public with their children, with their family, and with their friends. But if a school wishes them to have that same option for personal protection and the protection of other ones while they’re in the schools the other eight or ten or more hours that our school staff give every single day, then suddenly that should require months of additional training that are not required for the rest of us that are not simply school staff,” said Eaton during a committee hearing.

As of now the pending supreme court case could decide if school districts are allowed to set their own training requirements or if it must follow the rules of a school resource officer. That involves more than 730 hours of peace officer training.