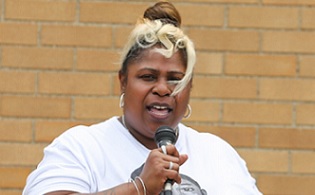 On an Instagram post that went up on June 23, Samaria Rice called out social justice activist Shaun King for profiting off the death of her son Tamir Rice’s. In her statement, she referred to him as an untrustworthy “white man acting black.” In 2014, 12-year-old Tamir was shot and killed by Cleveland police while playing outside with a toy gun.

The New York Post reported the dispute between the child’s mother and the activist, Samaria was likely triggered because King published details of a conversation they had.”

“Why do you think it’s so important to tell folks we had a conversation?” Rice questioned King directly in the post she shared on Wednesday.

On June 22, King posted a now-deleted podcast episode titled “I spoke to Samaria Rice this past week,“where he described his talks with Samaria as a “much-needed conversation.”

“I learned a lot. Listened a lot. Shared my heart. And pledged we would continue to fight to get justice and accountability for Tamir,” King stated on The North Star.

“Well we talked and everything that was said was very toxic and uncomfortable for me to hear that you raised additional money and then say you did not want to bother me. Personally, I don’t understand how you sleep at night. I never gave you permission to raise nothing. Along with the united states, you robbed me for the death of my son.” At one point, she opted to describe the discussion as “a cop and donut conversation.”

King also shared on his website that Rice “may have been misled about his efforts.”

Samaria recently called out activists who she feels have “exploited black death for clout”, and even released a statement with a list detailing how she believes they should “work on the behalf of the Black community.”