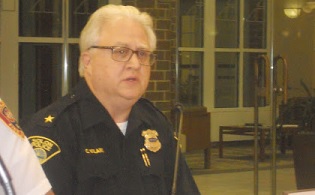 Marvin Robinson had three encounters with Cleveland Police between June 4 and June 14.

Each police report describes a person in the middle of a mental health crisis. The third one describes Robinson carrying on full conversations with himself while waiting for a psychiatric evaluation.

After receiving medication, he was booked into the Cuyahoga County jail where he spent the next two months. He was charged with breaking and entering.

Sometime between Aug. 10 and Aug. 25, he was brought to the MetroHealth ICU with kidney failure.

“I didn’t find out they had took him to the hospital until I started investigating to find out what was going on with my son,” his mother, Maria Robinson-Wallace, said. “One day we went on the internet to try to see when he goes to court.”

She learned from the court docket that Marvin had been hospitalized.

Robinson-Wallace called the warden’s office to try to see her son. That didn’t work. She went to the hospital and found his room number. They wouldn’t let her in then either.

“Everybody just started shutting the door on me, saying they wouldn’t talk to me, giving me the run around, nobody would tell me what was wrong with my son,” Robinson-Wallace said.

Close to two years have gone by since a U.S. Marshals Service report laid bare inhumane conditions inside the Cuyahoga County jail. Just two weeks ago, a jury in Cleveland found former Cuyahoga County Jail Director Ken Mills guilty on four charges related to conditions at the jail at the time the report came out.

Recent experiences like Robinson’s indicate that many of the problems may still be going on.

Robinson had only one good kidney when he got to jail. But what happened that made his health deteriorate so dramatically while in jail?

“He said his kidneys were shut down,” Robinson-Wallace said, when she spoke to herson on Sept. 17 for the first time since he went to the hospital. “He didn’t have no water to drink. In the jail. And that’s why he was in ICU for so long.”

Ideastream Public Media asked the county about a lack of drinking water at the jail. A spokesperson declined to comment, citing pending litigation, and refused to provide any more details.

But Robinson is not the only person to describe a lack of drinking water.

Tiwain Martin was held on the seventh floor of jail 1 in Downtown Cleveland from Aug. 29 to Sept. 3.

Martin got a Styrofoam cup to fill with drinking water out of the small sink attached to the back of the toilet in his cell.

“Supposed to be a water fountain, with water, but it don’t lift out,” Martin said. “Everybody says the same thing. When you press the water, it’s coming out the sides. It’s touching the little nozzle that it’s coming out of and it’s pouring out of the side of the nozzle and it’s gotta go in the cup like that.”

That sink was just about his only source of drinking water because of a policy called red zoning. As a way to deal with staff shortages at the jail, detainees are kept inside their cells for extended periods. It allows for one corrections officer to monitor twice or three times the area they would when the jail is properly staffed.

According to Martin, he spent as much as 30 hours at a time locked down and got out of his cell once a day.

These issues at the jail — a lack of medical care, insufficient access to drinking water and red zoning — were at the center of the case the state built against former jail Director Ken Mills.

Both Martin and Robinson-Wallace said this was their first close-up encounter with conditions at the county jail.

“Treating people like they don’t have nobody that love them, treating people like inhumane,” Robinson-Wallace said. “I didn’t see no type of care or remorse, even when my son went to ICU. If somebody goes to ICU, that means they’re close to death.”

The sheriff, who is responsible for the jail, told county council this week that the public works department has completed 5300 maintenance orders at the jail this year.

The county also recently approved pay increases and other incentives as a way to address staffing shortages.