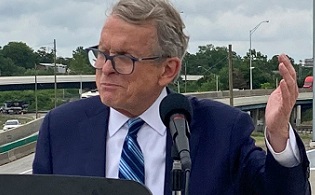 Gov. Mike DeWine (R-Ohio) says the new Ohio Congressional map he signed into law is the best option out of the proposals offered by state lawmakers.

DeWine backed up that claim by listing what he sees as positives of the map, which included keeping most of Ohio’s largest cities whole, keeping the Mahoning Valley in the same district, and only splitting 12 counties.

He added that there are more competitive districts than the other proposals and the current district map. DeWine said most people define “competitive” as districts under a 10% margin of Republican and Democratic voters.

“But we also know that we have the power of incumbency which is certainly important, it helps Democrats, it helps Republicans. You have how much money is put into a race, you have who the candidate is. So all of these things are variables,” said DeWine.

But anti-gerrymandering advocates argue the map creates 12 out of 15 districts that either heavily favor or lean in favor of Republicans. And of those “competitive” districts, only one leans in favor of Democrats.